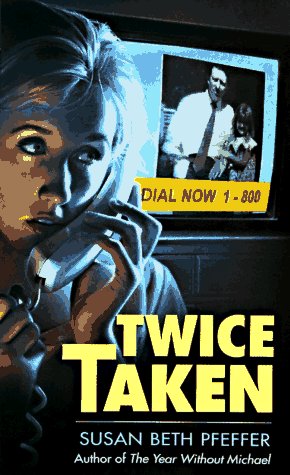 It seems incredible that a call-in TV show  featuring pictures of missing children could change her  life so drastically, but when a 16-year-old  recognizes her father in the photo on the screen, she  discovers that the family who's been searching for  their daughter is looking for  her.
But who is she? Brooke or Amy?  She's been living with her father and now learns  he's taken her illegally. Who do you love when  everyone says they love you? How can anyone know which  parent loves you most?
Susan Beth  Pfeffer delivers yet another hard-hitting novel  that delves into the issues that confront real teens  today.
"Lively narration,  peppered with wry, insightful wit, and the story's  balanced resolution make it enjoyable  reading...."--School Library  Journal
"Pfeffer perfectly conveys Brooke's hurt  and resentment.... Readers will share Brooke's  anxiety as she tries to adapt to a new family while  remaining loyal to her father, and they'll  understand her anger when she finally realizes the cost of  her father's  actions."--Booklist
"The emotions are  raw...but the story combines the draw of sensational  headlines with an understanding of teenage  struggles."--The Bulletin of the Center for  Children's  Books
"The author maintains so brisk a pace and so  appealingly plumbs her heroine's emotional life that the  reader will want to believe in the  story."--Publishers Weekly, Starred Review

About the Author:
Award-winning author Susan Beth Pfeffer, has written over sixty books for children and young adults. She began her career in 1970, with the publication of her first book, Just Morgan, which she wrote her last semester at New York University.
Ms. Pfeffer's books include middle-grade novels (The Pizza Puzzle), historical fiction (Nobody's Daughter and its companion volume Justice for Emily), and young adult novels (Family of Strangers and Twice Taken). Her young adult novel About David was awarded the South Carolina Young Adult Book Award.
Her young adult novel The Year Without Michael, an ALA Best Book for Young Adults and winner of the South Carolina Young Adult Book Award, was named by the American Library Association as one of the hundred best books for teenagers written between 1968-1993.
Susan Beth Pfeffer is also the author of the popular Portraits of Little Women series. Created for readers grades 3-6, each of the books in the series captures one of the beloved March sisters from Little Women--Meg, Jo, Beth, and Amy--at age 10. These unforgettable heroines experience the joys and sorrows of sisterhood, family life, and a changing America.
From School Library Journal:
Grade 6-9-Brooke was kidnapped by her father when she was five. For 11 years she has lived first with the belief that her mother was dead and then that she simply didn't want her. But, while watching "Still Missing" on television, she recognizes herself and impulsively calls the 800 number. Suddenly, she is whisked off by the police, scooped up by a doting mother, and deposited into the midst of a ready-made family complete with two younger half-siblings and a sympathetic stepfather. Events spin out of her control and she realizes that in order to help protect her father from legal prosecution, she must show what a model child he has produced. She meekly complies with her "new" family's every wish without even a whimper of protest while they repeatedly trash the man she still loves. Finally, after weeks of suppressing her feelings, a censored letter from her father precipitates the release of her conflicting emotions. With Brooke leading the way, mother and daughter find common ground upon which to build their future together. Neither of Brooke's parents are totally guiltless. They are weak characters floating in a vague set of circumstances that often seem incomplete or simply unreal. Offering a less compelling plot than Caroline Cooney's The Face on the Milk Carton (Bantam, 1990), this novel is also far less involving. Brooke's wisdom is uncanny, and her self-restraint almost saintly. Yet, her lively narration, peppered with wry, insightful wit, and the story's balanced resolution make it enjoyable reading, if not a strong literary achievement.
Margaret Cole, Oceanside Library, NY
Copyright 1994 Reed Business Information, Inc.