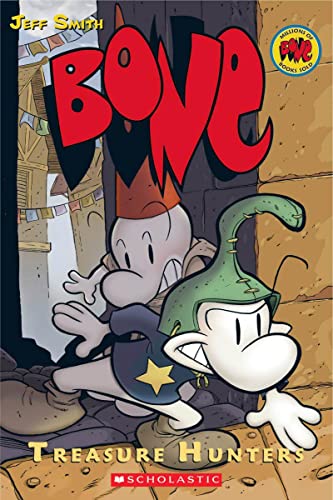 Tensions come to a head in the eighth epic volume of the BONE series.

The Bone cousins, Gran'ma Ben, and Thorn finally reach the city of Atheia, where they reunite with old friends and plan to thwart The Lord of the Locusts. The Pawan army has joined forces with Briar and the rat creatures, and danger increases as Thorn's visions get stronger. Meanwhile, Phoney Bone is convinced Atheia is a city rich in gold, and he is determined to find it!

Jeff Smith is the creator of the award-winning, NEW YORK TIMES bestselling BONE series. He was born and raised in the American Midwest and learned about cartooning from comic strips, comic books, and TV animation. Visit him online at www.boneville.com.

Praise for the Bone series

"One of the best kids' comics ever." -VIBE magazine

"Jeff Smith's Bone series . . . is a true accomplishment. Not only is it a terrific graphic-novel series, but it's a superb example of storytelling." -School Library Journal

"Bone is storytelling at its best, full of endearing, flawed characters whose adventures run the gamut from hilarious whimsy to thrilling drama." -Entertainment Weekly