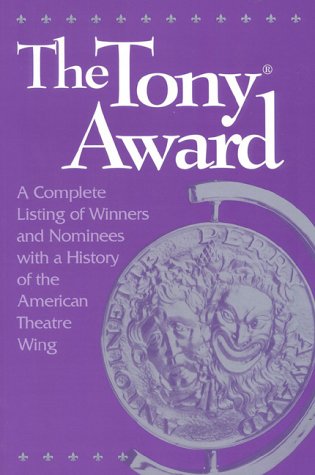 Presented each year by the American Theatre Wing, the Tony Award represents the pinnacle of their career for many people, whether onstage or backstage. This is a comprehensive listing of all nominees and winners, from the first presentation in 1947, alongside a history of the award.

This slender volume is a new edition of a tribute to the winners of the Tony Award, presented each year to honor distinguished achievement in the theater. Several previous editions were published in the 1980s by Crown; Stevenson continues as editor. There are few changes in this new edition: the awards are still arranged by decade and year, and nominees for each award are listed, with the winner designated by a star. The categories remain the same, and actors and actresses are listed separately for plays and musicals. Other categories are the plays and musicals themselves; director; book; score; scenic, costume, and lighting design; choreographer; revival; and special awards. A brief chapter on Antoinette Perry and an interesting history of the American Theatre Wing remain unchanged.

The body of the work includes awards from 1947 through 1994 (the Tony Award is presented in January). A new section, "Reflections from 1994 Tony Award Winners," features brief remarks by a few recipients. "Rules and Regulations of the American Theatre Wing's Tony Awards 1993-94 Season" is a total revision of a more general section in previous editions. It spells out, in great detail, membership on the decision-making bodies. An index lists personal names and play titles.

Libraries that serve strong performing arts programs will find this work affordable and a handy reference. Those owning the Tony Award Book: Four Decades of Great American Theater by Lee Alan Morrow (Abbeville, 1987) will find the latter lavishly illustrated with photographs and much of the same factual information through 1987. The works can be used effectively together.