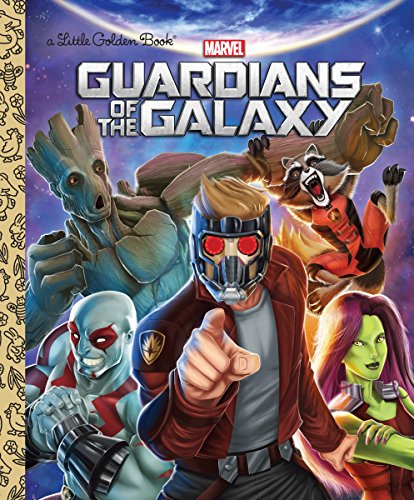 Star-Lord, Groot, Rocket Raccoon, and the other Guardians of the Galaxy race through a universe filled with foes to save the day! Boys and girls ages 2 to 5 will love this action-packed Little Golden Book featuring their favorite out-of-this-world Marvel heroes and villains.

About the Author:
New York Times bestselling author John Sazaklis enjoys adventures of his favorite characters. To him, it's a dream come true! By day, John is a somewhat mild-mannered art director and designer at a publishing house. He has also illustrated Spider-Man books and created toys used in MAD magazine. John lives with his equally (if not more) super-powered, beautiful wife and daughter in New York City.

Michael Borkowski is an artist and illustrator who has worked on numerous animated series, including X-Men, Teenage Mutant Ninja Turtles, Dragon Tales, and Scooby-Doo, and the animated feature film Ice Age: Dawn of the Dinosaurs. Borkowski has also illustrated for Random House Books for Young Readers, including books for the Doctor Strange and Guardians of the Galaxy franchises. He lives in Syracuse, New York.

Michael Atiyeh is a colorist and comic book artist. He is a frequent contributor to Marvel Comics, DC Comics, and Dark Horse Comics. His illustrations have also appeared in a series of Little Golden Books based on Marvel properties.

Guardians of the Galaxy