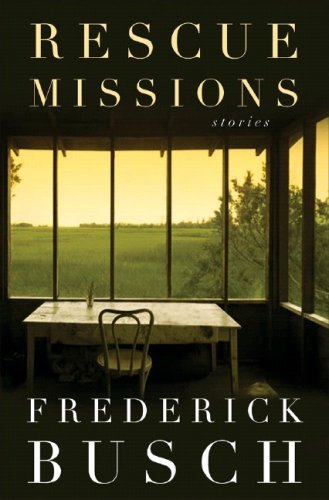 Stories of mercy and need among lovers, family, and friends by "one of our very best short-story writers" (Anne Beattie).

The war in Iraq is present in some of these stories, and so are the domestic wars; and, in every case, a character seeks to comfort or to save someone. "The Rescue Mission" is narrated by a man who runs a rescue mission out of a trailer in upstate New York. In his attempt to save a young woman from the brutality of her boyfriend, he is forced to confront the reality of his own mother's death. In "Good to Go," an estranged couple try to save their grown son from the scars of war. Physical love, familial love, the need to give comfortand the need for comfortare themes skillfully rendered by a master of the short story whose achievements have been acknowledged with the PEN/Malamud Award for short fiction and the American Academy of Arts and Letters Award of Merit for lifetime achievement in the short story.

About the Author:
Frederick Busch (1941–2006) was the recipient of many honors, including an American Academy of Arts and Letters Fiction Award, a National Jewish Book Award, and the PEN/Malamud Award. The prolific author of sixteen novels and six collections of short stories, Busch is renowned for his writing’s emotional nuance and minimal, plainspoken style. A native of Brooklyn, New York, he lived most of his life in upstate New York, where he worked for forty years as a professor at Colgate University.
From Publishers Weekly:
Starred Review. American letters endured a major loss in February 2006 with the sudden death of the author of North, The Night Inspector and 23 other books. Set in the present—from the battlefields of Iraq (two stories: "Good to Go" and "Patrols") to upstate New York (where Busch taught for many years)—these 15 works share a common theme of people trying to provide relief to those in physical, emotional and mental peril. In "One Last Time for Old Times' Sake," a married man tries to stop his lover from ending their affair so that she can nurse her dying husband. The recently widowed grandfather of a preschooler tries to recover his grandson's lost superhero cape and winds up in an encounter with the boy's teacher in "The Small Salvation." A woman hospitalized as a suicide risk, in "Metal Fatigue," challenges her father's notions of mercy during his visit. Some rescues are successful; others appear to fail; in many cases the rescuers are in the process of saving themselves. Together they offer an incisive examination of the idea of beneficence. (Oct.)
Copyright © Reed Business Information, a division of Reed Elsevier Inc. All rights reserved.