Items related to Back to the Moon: A Novel

Hickam, Homer Back to the Moon: A Novel 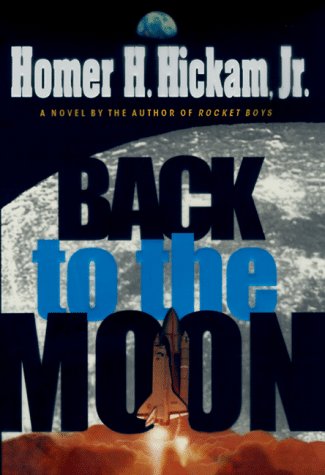 A renegade rocket man haunted by his past. A beautiful daredevil who thinks she can do it all--until she finds herself on the adventure of her life. A death-defying mission so risky, so audacious that no one would try it...unless the fate of the world depended on its success.

Thirty years after man's first lunar landing, retired NASA engineer Homer Hickam, Jr., offers a brilliantly imagined, endlessly entertaining return to space adventure in his spectacular first novel, Back to the Moon. In his bestselling memoir, Rocket Boys, Hickam memorably evoked our captivation with our nation's first halting ventures into space. Now he reminds us of the long-lost wonder with which we once watched America's conquest of the moon--and celebrated the triumph of mind, soul, and spirit that got us there--in this page-turning tale of the first moon shot of the new millennium.

Jack Medaris doesn't "borrow" the space shuttle Columbia to be a hero or a villain. A man of science driven by the memory of the woman who once inspired him, Jack risks his life, his name, and everything he has, to sidetrack the shuttle crew and take her on an unscheduled detour to the moon, where the secrets of his past--and the future of the world--await him. But when the meticulously plotted launch goes fatally wrong, and payload specialist Penny High Eagle further complicates Jack's plan, he must confront unforeseen challenges both in space and on the ground, where deadly forces are amassing to prevent the Columbia from reaching the moon.

Writing with the detail and intelligence that only an insider could have, Hickam takes us to places few have ever seen, strapping us into the cockpit of the shuttle and hurtling us into orbit and beyond. From the crackling tension of mission control to the savage emptiness of deep space, from the massive rocket engines capable of generating millions of pounds of thrust to the tiny killing machines awaiting a bygone era's orders to unleash their high-tech fury, here are the sights and science of space as you've never seen them before. Here, too, are the men and women of unfailing invention and intelligence who are soon caught up in the story: astronauts and attorneys, physicists and politicians, unsung heroes behind the scenes and shadowy agents of darkness behind the veil of history. And at the spiraling tale's isolated center are Jack and Penny, locked in a battle of wit and wills, rocketing weightless through space as their fates grow inextricably intertwined.

A no-holds-barred joyride of a thriller, Back to the Moon confirms that Homer Hickam is a master storyteller like no other, spinning a tale of high-flying adventure while expertly navigating the vast expanses of both the far-flung universe and the human heart.

Review:
Space is the final frontier--and its mysteries have fascinated Homer H. Hickam since childhood. In 1957, at age 14, he built his first rocket--and so began his space-age career, which eventually led to an engineering job at NASA. But in 1998, his calling blasted off in a new, unexpected way with the release of a bestselling memoir, Rocket Boys, (made into the mesmerizing movie, October Sky). Now, with Back to the Moon, the man-of-science-turned-memoirist dabbles in the world of fiction.

Despite its high-tech premise and lunar locale--Back to the Moon is no science fiction saga. It is, instead, a fast-paced technological thriller--filled with exceptional scientific know-how. (The author describes how spices are essential for astronauts because the normal aroma of food does not "drift into the sinuses or caress the palate in a microgravity environment.")

The space shuttle Columbia has been hijacked by an ex-astronaut and former employee of NASA, Jack Medaris. But Jack is by no means the bad guy--he has simply grown disillusioned with NASA, with its "timid" bureaucracy that no longer works for the good of mankind. Earth's supply of fuel is in jeopardy, and Jack believes that the moon holds the secrets of an alternative source of power. But a shady organization called the Millennium group is determined to stop the space shuttle from reaching the moon. As the shuttle hurtles through the galaxy, the renegade astronaut battles to steer the ship towards its destination. He also fights to keep himself from falling in love with one of the ship's crew members--a feisty female astronaut named Penny High Eagle.

Even if the plot complexities seems to defy gravity at times, Back to the Moon still dares to tread where few thrillers have gone before--into space. --Naomi Gesinger

From the Back Cover:
"Wonderful....A great adventure yarn....Danger keeps zapping at you from all sides at top-gun speed...the action is nonstop."
--The Washington Post Book World