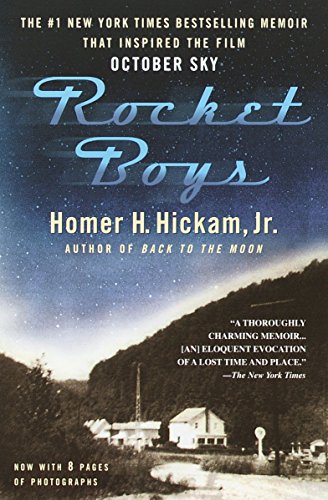 The #1 New York Times bestselling memoir that inspired the film October Sky, Rocket Boys is a uniquely American memoir—a powerful, luminous story of coming of age at the dawn of the 1960s, of a mother's love and a father's fears, of a group of young men who dreamed of launching rockets into outer space . . . and who made those dreams come true.

With the grace of a natural storyteller, NASA engineer Homer Hickam paints a warm, vivid portrait of the harsh West Virginia mining town of his youth, evoking a time of innocence and promise, when anything was possible, even in a company town that swallowed its men alive. A story of romance and loss, of growing up and getting out, Homer Hickam's lush, lyrical memoir is a chronicle of triumph—at once exquisitely written and marvelously entertaining.

Now with 8 pages of photographs.

One of the most beloved bestsellers in recent years, Rocket Boys is a uniquely American memoir. A powerful, luminous story of coming of age at the end of the 1950s, it is the story of a mother's love and a father's fears, of growing up and getting out. With the grace of a natural storyteller, Homer Hickam looks back after a distinguished NASA career to tell his own true story of growing up in a dying coal town and of how, against the odds, he made his dreams of launching rockets into outer space come true.

A story of romance and loss and a keen portrait of life at an extraordinary point in American history, Rocket Boys is a chronicle of triumph.