Items related to Remaking Eden: Cloning and Beyond in a Brave New World

Silver, Lee M. Remaking Eden: Cloning and Beyond in a Brave New World 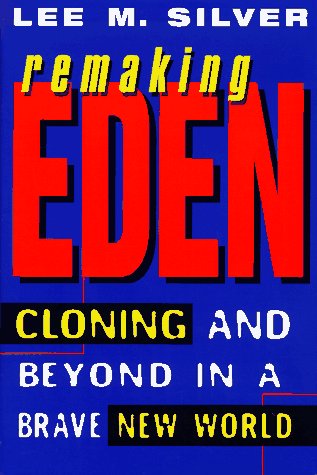 On February 27, 1997, a stunning announcement appeared in the British journal Nature: for the first time ever, a mammal--a lamb named Dolly--had been successfully cloned from an adult cell. Less than a week later, scientists reported the successful cloning of a rhesus monkey, a primate whose reproduction and development is almost identical to our own. With two bold and hitherto unthinkable strokes, science fiction was transformed into science fact, preparing the way for a miraculous event that is, in all probability, inevitable: the cloning of a human being.

A distinguished scientist and professor at Princeton University, Lee M. Silver reveals what awaits us in the brilliant light of the new day that is now dawning. REMAKING EDEN is a fascinating exploration of the future of reprogenetic technologies--a cautiously optimistic look at the scientific advances that will allow us to engineer life in ways that were unimaginable just a few short years ago. Indeed, in ways that go far beyond cloning, and that are at once more thrilling and more frightening.

This is a brilliant, provocative, and necessary book. For better or worse, it describes the likely future of humankind--beyond fears both reasoned and unreasonable, beyond unrealistic utopian visions--an extra ordinary journey into a rapidly evolving tomorrow that no man or woman can forestall, but that we must all recognize and understand. REMAKING EDEN is an essential primer for that tomorrow.

Aldous Huxley wrote Brave New World in 1932, predicting a future of genetic control that now lies within our technological grasp. "While Huxley guessed right about the power we would gain over the process of reproduction, I think he was dead wrong when it came to predicting who would use the power," says geneticist Lee Silver. "It is individuals and couples who want to reproduce themselves in their own images, who want their children to be happy and successful, who will seize control of these new technologies." In Remaking Eden Silver shows how close we are to human genetic engineering, and how strong the forces are that are taking us there.

Lee M. Silver is professor of molecular biology and public affairs at the Woodrow Wilson School of Public and International Affairs at Princeton Uni-versity, and author of Challenging Nature. He holds a Ph.D. in biophysics from Harvard University, and he lives with his family in New Jersey and New York.