Items related to Shrub: The Short but Happy Political Life of George... 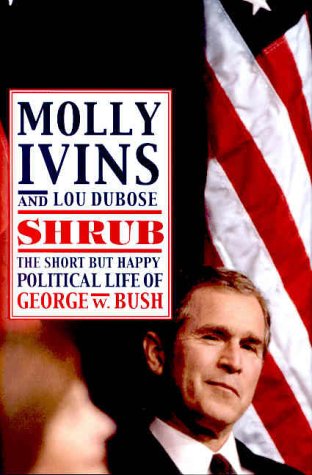 When it comes to reporting on politics, nobody does it smarter or funnier than bestselling author Molly Ivins. In Shrub, Ivins focuses her Texas-size smarts on the biggest politician in her home state: George Walker Bush, or "Shrub," as Ivins has nicknamed Bush the Younger.

A candidate of vague speeches and an ambiguous platform, Bush leads the pack of GOP 2000 presidential hopefuls; "Dubya" could very well be our next president. What voters need now is an original, smart, and accessible analysis of Bush--one that leaves the "youthful indiscretions" to the tabloids and gets to the heart of his policies and motivations. Ivins is the perfect woman for the job.

With her trademark wit and down-home wisdom, Molly Ivins shares three pieces of advice on judging a politician: "The first is to look at the record. The second is to look at the record. And third, look at the record." In this book, Ivins takes a good, hard look at the record of the man who could be the leader of the free world. Beginning with his post-college military career, Ivins tracks Dubya's winding, sometimes unlikely path from a failed congressional bid to a two-term governorship. Bush has made plenty of friends and supporters along the way, including Texas oil barons, evangelist Billy Graham, and co-investors in the Texas Rangers baseball team. "You would have to work at it to dislike the man," she writes. But for all of Bush's likeability, Ivins points to a disconcerting lack of political passion from this ascending presidential candidate. In her words, "If you think his daddy had trouble with 'the vision thing,' wait till you meet this one."

Witty, trenchant, and on target, Ivins gives a singularly perceptive and entertaining analysis of George W. Bush. To head to the voting booth without it would be downright un-American.

From Shrub: The Short but Happy Political Life of George W. Bush

"        The past is prologue in politics. If a politician is left, right, weak, strong, given to the waffle or the flip-flop, or, as sometimes happens, an able soul who performs well under pressure, all that will be in the record."

¸         Bush's welfare record: "Texas pols like to 'git tuff' on crime, welfare, commies, and other bad stuff. Bush proposed to git tuff on welfare recipients by ending the allowance for each additional child--which in Texas is $38 a month."

¸         Bush and the Christian right: "Bush has learned to dance with the Christian right. It has been interesting and amusing to watch the process. Interesting because it's sometimes hard to tell who's leading and who's following; amusing because when a scion of Old Yankee money gets together with a televangelist with too much Elvis, the result is swell entertainment."

¸         Bush's environmental record: Since Governor Bush's election, Texas air quality has been rated the worst in the nation, leading all fifty states in overall toxic releases, recognized carcinogens in the air, cancer risk, and ten other categories of pollutants.

¸         Bush's military career: "Bush was promoted as the Texas Air National Guard's anti-drug poster boy, one of life's little ironies given the difficulty he has had answering cocaine questions all these years later. 'George Walker Bush is one member of the younger generation who doesn't get his kicks from pot or hashish or speed,' reads a Guard press release of 1970. 'Oh, he gets high, all right, but not from narcotics.'"

"Youthful political reporters are always told there are three ways to judge a politician," write Molly Ivins and Lou Dubose in Shrub. "The first is to look at the record. The second is to look at the record. And third, look at the record." The record under scrutiny in this brief, informative book belongs to one George W. Bush--dubbed "Shrub" by Ivins--governor of Texas and 2000 presidential hopeful. These two veteran journalists know how politics are played in Texas and they've done their homework, writing a comprehensive examination of Bush's professional and political life that's a lively read, to boot. And if the title alone doesn't convey their particular slant, perhaps the following caveat from the introduction will: "If, at the end of this short book, you find W. Bush's political résumé a little light, don't blame us. There's really not much there. We have been looking for six years."

Beginning with his admission to the Texas National Guard during the Vietnam War (where he bypassed a waiting list of about 100,000), the authors go on to deconstruct his losing congressional bid, his failed career as an oil executive, and his role as managing partner of the Texas Rangers baseball team, revealing how he was helped every step of the way by wealthy and influential friends of the family. Ever popular, Dubya has always been good at rounding up powerful players to bankroll a variety of ventures, including political campaigns. For this reason, explain the authors, along with his lineage and social status, Bush's primary allegiance is to the business community. While his speeches may deal with the "entertainment issues" of "God, guns, and gays," Bush is a "wholly owned subsidiary of corporate America," they write. They further point out that Texas ranks near the bottom of the nation in terms of a number of social categories, such as poverty, health insurance for children, and pollution, spearing the governor for his less-than-compassionate conservatism.

Shrub is not a complete Bush whacking, though. The authors laud the governor's record on education, in which he has managed to raise standards, push local control of schools, and launch a successful reading campaign. They also cite his wooing of the Hispanic vote and his ability to bridge the gap between the Christian right and the economic conservatives within the Republican party as evidence of true political acumen, though they maintain he lacks a penchant for actual governing: "From the record, it appears that he doesn't know much, doesn't do much and doesn't care much about governing." Bush has admitted that he dislikes reading, particularly about policy issues, and that he hates meetings and briefings, causing the authors to wonder, "The puzzle of Bush is why someone with so little interest in or attention for policy, for making government work, would want the job of president, or even governor."

Love him or leave him, Shrub leaves much to consider about the man who would be president. And it can be read in about a day. --Shawn Carkonen

Molly Ivins' column is syndicated to more than two hundred newspapers from Anchorage to Miami, including her home paper, the Fort Worth Star-Telegram. A three-time Pulitzer Prize finalist, she is the former co-editor of The Texas Observer and the former Rocky Mountain bureau chief for The New York Times. She has a B.A. from Smith College and a master's in journalism from Columbia University. Her first book, Molly Ivins Can't Say That, Can She?, spent more than twelve months on the New York Times bestseller list.

Lou Dubose has been active in Texas journalism for seventeen years, as both a newspaper reporter and a freelancer, and has covered the Texas Legislature for the past thirteen years. He has a master's degree in Latin American studies. Since 1987, he has been the editor of The Texas Observer.

SHRUB: THE SHORT BUT HAPPY POLIT