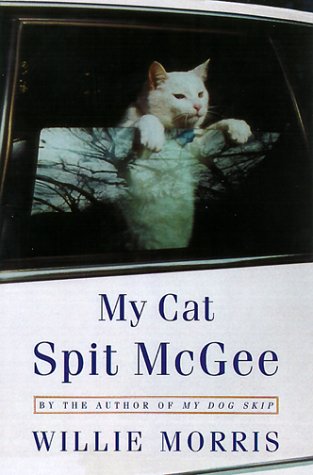 Willie Morris never liked cats—indeed, he had a loathing of cats going back to his childhood.

Willie was always a dog man, as were almost all of the people he knew. My Dog Skip, his moving tribute to the dog he loved in boyhood, became an instant classic and then a captivating film.

And when his beloved black Lab, Pete, died, and his friends asked, "Will you get another dog?" Willie replied, "No, I'll get another wife first."

And that is precisely what happened—the wife part, anyway. But the woman Willie married turned out to be a cat woman, and on their first Christmas together, a little white waif found starving in a ditch off old Highway 51 outside Jackson, Mississippi, crept out from behind their Christmas tree with a red Yuletide ribbon around her neck. Willie was horrified, but that kitten eventually became the mother of Spit McGee, who is the subject of this surprising, beguiling, and altogether winning book.

When Spit McGee was three weeks old, he almost died, but he was saved by Willie with a little help from Clinic Cat, who gave him a blood transfusion. Spit McGee was tied to Willie thereafter, a fount of affection, loyalty, crankiness, and enigma—not to mention high and resilient intelligence. Spit has one blue eye and one golden eye. Although folk wisdom has it that a cat with different colored eyes is deaf, Spit McGee, according to Willie, could pick up a dinner conversation in Memphis, two hundred miles away.

My Cat Spit McGee vividly describes what Willie learned about cats over the years—their habits, eccentricities, and resourcefulness, the ways in which they have been irrevocably shaped by their long-ago jungle origin, and how they differ from dogs.

The result is an endearing, story-filled celebration of the love that millions of others have for their cats. It honors, too, an abiding comradeship, and Willie's and Spit's daily adventures as they tried to fathom each other.

My Cat Spit McGee is the memorable sequel to My Dog Skip and one of the finest books ever written about a cat.

"[Willie Morris is] one of the most beloved writers of the modern South." --The New York Times

"In this lovely sequel to My Dog Skip, Morris shows that old dogs can learn new tricks." --Southern Living

In addition to My Dog Skip, Willie Morris was also the author of North Toward Home, New York Days, and many other books. As the imaginative and creative editor of Harper's magazine he was a major influence in changing our postwar literary and journalistic history. He died in 1999 in Jackson, Mississippi, where he lived with his wife, JoAnne, his friend Spit McGee, and his other cats, Mamie and Bessie.