Items related to An American Story 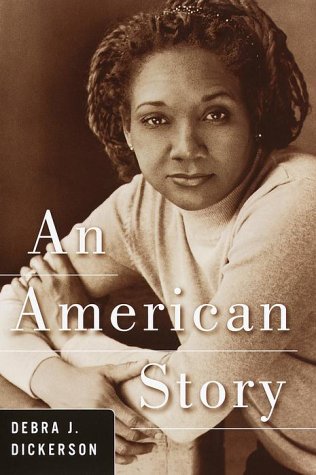 Debra Dickerson's parents were share-croppers who migrated north after World War II. Born in 1959, Dickerson is an amalgam of her background--rural southern conservative and midwestern liberal--and at the same time a contemporary woman whose life has been shaped by the hardscrabble determination of her heritage.

In this book Dickerson bears brilliant witness to her rich, tumultuous life: the crippling self-doubt of her adolescence and her belief in education as a way out; her transformation in the U.S. Air Force into a distinguished intelligence officer; her years at Harvard Law School and metamorphosis into a "neurotic attorney with a Gold Card"; and, finally, her current position as a journalist in demand for her refreshing and controversially sane views on social issues.

With sharp intelligence and fierce wit, Dickerson shows us how she became what she is today--an iconoclastic American who transcends traditional notions of race and class.

Debra Dickerson's fiercely honest account of her journey from the black working class to the ivied halls of Harvard Law School couldn't be more aptly titled. What's more American than someone who reaches a political turning point as a result of buying a lousy car? At the time, Dickerson was a conservative supporter of Ronald Reagan who believed her north St. Louis neighbors were poor and jobless because of their personal failings--and of course, it wasn't really her lemon of a Renault Alliance that changed her mind. But after years of struggling to get an education while her brother Bobby threw away every opportunity, after finding an apparent refuge in the Air Force (just as her bitter, violent father had during World War II in the Marines), Dickerson was appalled that "a blameless person in uniform" was expected, by everyone from her superior officers to the lawyers she tried to hire to help her, to make payments on a car that wouldn't run. "That experience made it crystal clear to me whose side society was on," she writes. Without abandoning her belief in personal responsibility, Dickerson began to reassess her contempt for people like her brother, who had made mistakes but had never been given any margin for error. Her reconciliation with Bobby is the most moving moment in a book notable for its bruising candor on the uncomfortable subjects of race and class, as well as its complete lack of political and cultural platitudes. --Wendy Smith

"[Dickerson] stirs the cauldron with a no-holds barred look at her humble Midwestern beginnings, scrappy clan, career strivings and personal miscues and victories. Rarely does a memoir strip away so much emotional armor to expose so many defects as well as strengths... If Dickerson is ruthless in her appraisal of others, she is twice as hard on her own shortcomings, especially the views about poor and lower-working-class blacks trapped in poverty and despair she held as a young woman... This tough, sassy memoir dramatically underscores the importance of hope, family and truth in one person's quest to reach and sustain her version of the American dream."
-- Publishers Weekly (starred review)