Items related to A Sound Like Thunder: A Novel 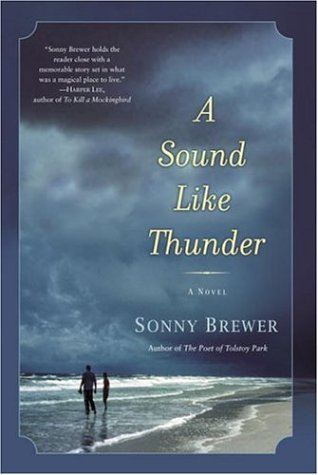 Approaching eighty, Rove MacNee sets out to write the story of his youth– “I will be forgiven, I’m sure, if I don’t remember things with stunning clarity.” What memories clearly remain resonate within him like rolling thunder and shower down like rain in Sonny Brewer’s superb and richly rewarding new novel of fathers and sons, family and betrayal.

Set in the small gulf town of Fairhope, Alabama, this lyrical coming-of-age tale begins in the winter of 1941. Named for his father’s drowned Labrador retriever, Rove is a strong-shouldered and self-reliant sixteen-year-old, an uneven match for his volatile father, Captain Dominus MacNee. Though he sometimes wishes the whiskey-soaked man would be lost at sea, Rove himself is in danger of sinking in the troubled waters of his home life.

Navigating between memoir and memory, past and present, Rove reflects upon the people and pursuits that have influenced his life: his passion for fishing, where the toss of the net is more thrilling than the catch in the bucket; his much-loved grandmother, who gives him a copy of Huckleberry Finn, saying, “Boys sometimes run away, you know”; and Anna Pearl Anderson, “the prettiest girl on the Eastern shore,” who ignites in Rove the first flickers of romance. Yet his greatest treasure, perhaps, is his twenty-five-foot sloop, the Sea Bird. Given to him as a gift, the Sea Bird brings with it both the possibility of salvation and the threat of disaster. As Rove dreams of escaping his tumultuous surroundings, it becomes apparent that he can never truly shake the hold of his seaside home unless he confronts, head on, a startling truth.

Returning to the setting of his much-lauded debut novel, The Poet of Tolstoy Park, Sonny Brewer, once again, gives a skillful performance in the Southern storytelling tradition. A Sound Like Thunder is a magnificently crafted tale of a man revisiting the crossroads of his life, connecting the fragmented keepsakes in his heart and mind, and reemerging with a clear understanding of his defining moment.

About the Author:
Sonny Brewer is the author of The Poet of Tolstoy Park. He started Over the Transom Bookshop in Fairhope, Alabama and is board chairman of the nonprofit Fairhope Center for the Writing Arts. He is the former editor in chief of Mobile Bay Monthly; he also published and edited Eastern Shore Quarterly magazine, edited Red Bluff Review, and was founding associate editor of the weekly West Alabama Gazette. Brewer is the editor of the acclaimed annual five-volume anthology of Southern writing Stories from the Blue Moon Cafe.
Excerpt. © Reprinted by permission. All rights reserved.:
November 1941

Thunder, low and trembling, rolled across the breezeless bay, and I wondered from where I stood on the shaky wooden dock if the sheer weight of the sound could set tiny ripples in motion on the water’s smooth face. The cypress two-by planking beneath my bare feet was weather-cracked and silvered. Many of the narrow wharf’s rusting nails were loosened and backing out of the joists, allowing random boards to cup and twist, and the protruding nails to snag and bloody a boy’s bare toes.

Gray dawn had not long since arisen, and my mother would be stirring the house to life, waking my younger brother, just turned ten. She would also awaken my grandmother, who had moved in with us soon after Grandpa Otis died.

My father was not at home, and the world was quiet.

Along this stretch of Alabama bayfront, no windows I could see were yet yellow with light, and I saw no one else moving. Ten or so miles to the north and west there on the other shore, across the smoky water the city of Mobile was still sleeping.

My father was captain of the Mary Foster, a fifty-foot melon schooner on a run to the New Basin Canal–front market out past Hagan Street in New Orleans. He was due back any day, maybe this morning, and usually drove home in his Ford truck from Farragut’s Basin, where he kept the schooner at anchor. The captain called the basin Farragut’s Turn, as did some of the older schoonermen, because it was the spot on Fish River where Admiral David Farragut, after the Civil War Battle of Mobile Bay, had found room enough to turn his gunboats around.

Sometimes, if the weather was fine, the captain would leave his truck at Farragut’s and motor his broad skiff up the bay from the pass at Big Mouth, dropping off crew and deckhands at this or that fishing camp strung out down the bay. Now that I was sixteen and legal to drive, I would sometimes be sent back in the skiff to Farragut’s to fetch home the truck, and I looked forward to those little excursions because I loved to drive. The run south down the bay alone in the skiff, my face skinning the wind and my hand twisting the throttle on the Evinrude, was almost as much fun.

My name is Rover, named for my father’s beloved shining black Labrador retriever that drowned in the wind-tossed waves of Mobile Bay while chasing a wounded mallard. The dog had paddled madly and happily, one might guess, after the duck through the frothy chop until he sank in exhaustion in five feet of brackish water not a hundred yards offshore from our bayside cottage the day before I was born.

The captain, in naming his son after his dog, had revealed a sense of humor that I had failed to inherit. I came up short of laughing each time I fought this or that taunting schoolmate who called me Rover. On my first day of school, I had dropped the last “r” and given my name as Rove, a name I did not mind actually. Anyone who added back the “r” and addressed me so had a fight on his hands. Years later David MacFarland would lift his upper lip with his index finger and show me a chipped tooth, would turn loose his lip, and let it segue into a smile and tell me parents should be more careful what they name their kids. We were fourteen when I punched him in the mouth. I walked away with a torn knuckle on my right hand, a scar to match David’s chip.

With this weather building, my father would drive instead of motoring up the bay in the skiff. Even knowing that, I looked south down the bay. I saw no skiff. I let my eyes sweep the horizon and a steam passenger ferry, an elongated black shape some miles across the flat water, was trailing a thin tendril of smoke into the dull pewter sky. It was the only thing moving on Mobile Bay as far as I could see. I lifted my shoulders against a cold shiver starting down my neck. The November morning still held the chill from last night’s low temperature which had dipped to near forty degrees.

It would storm today. This odd stillness would soon be shattered, rough weather probably setting in before the Bay Queen made the dock at Stedman’s Landing, three or so miles up the shore north of Fairhope. If I did not hurry home I might get caught in the rain, which, in fact, I did not mind. But, on the other hand, if I did not hurry, there was some chance that my father would be already seated at the kitchen table. I did not want to come into the house after him.

My preference, in fact, if it were not for leaving Mother alone to deal with the captain, would be to stay away entirely.

I had worked the deck on the Mary Foster, and I knew that when the captain sailed home, done with the white-shirted dealers in New Orleans who had haggled down his prices, done with the sweating thick-armed roustabouts who off-loaded the fat, striped melons—or in other seasons sweet potatoes or turpentine or what have you—and when his crew had piled them onto waiting trucks, when the captain had heeled to breezes across Lake Pontchartrain, negotiated the currents in the pass at the Rigolets and into Lake Borgne, laid down the lee rail in gusts across the Mississippi Sound, ghosted past Dauphin Island and Fort Gaines to starboard and made his cut northward into Mobile Bay with Fort Morgan off his stern quarter, when he had pointed the bow of the Mary Foster east into the narrow mouth of Weeks Bay, then slid the schooner between Fish River’s twisty and wooded banks, bending around curve after curve those short four miles upstream to Farragut’s Basin, when he had anchored there with the rest of the schooner fleet, then the good captain was ready for a bottle of Scotch whiskey.

I also knew, because I overheard the accusations from Mother and heard no attendant denial from my father, that the captain sometimes carried on with Creole whores at Lanaux’s Landing in Magnolia Springs, and lay out drunk for several days instead of coming home when the Mary Foster returned to port. And when he’d had a sailor’s fill of this merriment, the captain would drive through the farmlands rattling along Baldwin County back roads to our home south of Fairhope near Battles Wharf. Captain Dominus MacNee’s homecomings were usually at the breakfast hour; they were usually noisy and threatening.

In the last two years, that long since the captain seemed to have stepped into an abyss and dragged himself out another man entirely, I had grown to sometimes hate for my father to come home, and sometimes secretly wished he would drown at sea. I believed there was at least some chance it might happen. And nights in my dream-rumpled bed, when that bad thing had there in the dark come to pass, I would awaken in tears already missing him.

Because my father might be coming home this morning, and because a profaning drunk at the breakfast table would be enough for Mother to manage without wondering after my whereabouts, and because I wished for the small advantage I might gain from being first ahead of the captain in Mother’s kitchen, I thought I might better get on home. I should coil my cast net down into the galvanized bucket beside my bare feet on the dock, take up its bail, and begin walking down the bluff overlooking the bay toward home.

It was enough of a hardship on my mother that my grandmother was sickly, and enough for her to get my reluctant brother Julian moving in the morning. I should start now walking that way, and then there crossed the plain of my mind a shadow, something wheeling high up and indistinguishable, but bearing some likeness to pain. So I stood stock-still and looked out across the water’s surface, settling my mind into something real, and letting my imaginings slip away.