Items related to Don't Tell Anyone 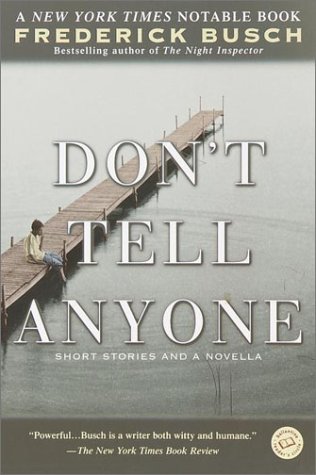 A new collection of short stories by the author of The Night Inspector explores the connections among people and asks why some succeed and others do not. Reader's Guide included. Reprint.

Review:
Domestic life, in Frederick Busch's 17 elegant stories, is like a cracked windshield: one tiny ping of gravel can, in time, fissure the whole thing. In "Machias," a man remembers the exact moment his marriage ruptured; he and his urbane wife were listening to an old curmudgeon, and each came away with an utterly different understanding of the tale, and the man. "I think it possible, as I look back when I dare, that our conversation in the shabby, lantern-lit dining room of the old man's house in Machias was the largest moment of my life. It went on. It is going on." Busch's characters can't help but spill their secrets, and they're pretty grumpy about it. In the ironically titled "The Talking Cure," a young boy works for a veterinarian who happens to be having an affair with his mother. The boy concludes, simply, "It's a story I try not to tell."

Don't Tell Anyone closes with "A Handbook for Spies." This long novella follows the life of a young, and then not-so-young, man whose parents escaped the Nazis in 1930s Paris. He is a professor in love with a married woman (a girl, really) who becomes a repository for his angst. With its dead-on campus milieu, its guilt-ridden sex, its inescapable ghosts of the past, it closely recalls Busch's 1997 masterpiece, Girls. And here, too, Busch comes as near as he ever does to delivering a manifesto on love: "Truly, he thought on one of his icy drives, Kafka is the patron saint of families. He had impressed a woman in graduate school with this observation. She had dated him, and it was not impossible, he thought, that Franz Kafka, snug as a bug in a bed, was the reason. To love, Kafka taught, was to be suspicious of what you must pay for the love." There exists no finer summing-up of Busch's own writing. --Claire Dederer

From the Back Cover:
“[A] SEARING COLLECTION . . . which treats the subject of love as though it were the backbone of a page turning thriller. Busch’s writing is so poetically precise and refined, so unsentimental, that the alienation of his characters is all the more devastating.”
–Entertainment Weekly

“RADIANT. . . . An exemplary collection of incandescent storytelling filled with electrifying truths. Despite the implied command of the title, don’t keep this book a secret. Once you’ve read it, tell everyone.”
–Chicago Tribune

“FREDERICK BUSCH IS ONE OF OUR VERY BEST SHORT STORY WRITERS. . . . [These] characters are eloquent and even quite brilliant.”
–ANN BEATTIE