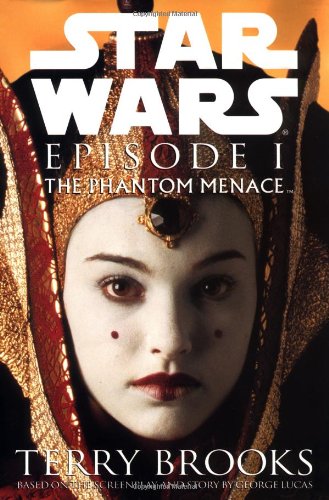 In barren desert lands and seedy spaceports . . . in vast underwater cities and in the blackest depths of space . . . unfolds a tale of good and evil, of myth and magic, of innocence and power. At last the saga that captured the imagination of millions turns back in time to reveal its cloaked origins--the start of a legend--the story of STAR WARS. Based on the screenplay by George Lucas, this novel by master storyteller Terry Brooks probes the depths of one of the greatest tales of our time, providing rich detail and insight into the minds and motives of the characters--and shedding bold new light on Lucas' brilliant creation.

A long time ago in a galaxy far, far away, an evil legacy long believed dead is stirring. Even the Jedi are caught by surprise, their attentions focused on the political unrest between the Trade Federation and the Republic. Now the dark side of the Force threatens to overwhelm the light, and only an ancient Jedi prophecy stands between hope and doom for the entire galaxy.

On the desert world of Tatooine, far from the concerns of the Republic, a slave boy works by day and dreams by night--of being a Jedi Knight and one day traveling the stars to worlds he's only heard of in stories . . . of finding a way to win freedom from enslavement for himself and his beloved mother. His only hope lies in his extraordinary instincts and his strange gift for understanding the "rightness" of things, talents that allow him to be one of the best pod racers on the planet.

In another part of the galaxy, the Jedi Knight Qui-Gon Jinn and his apprentice, young Obi-Wan Kenobi, are charged with the protection of Amidala, the young Queen of Naboo, as she seeks to end the siege of her planet by Trade Federation warships. It is this quest that brings Qui-Gon, Obi-Wan, and the Queen's beautiful young handmaiden to the sand-swept streets of Tatooine and the shop where the slave boy Anakin Skywalker toils and dreams. And it is this unexpected meeting that marks the beginning of the drama that will become legend . . .

Alexander Adams, the actor who reads this full-length novelization of Star Wars, Episode I: The Phantom Menace, actually manages to do Jar Jar better than Jar Jar himself. Although he does sound a bit like a well-meaning dad doing an impression of the gangly amphibian for his kids, that added bit of restraint and unaffected goofiness actually works. Likewise, Adams's voice--all earnest and NPR-smooth--does good service to the rest of the cast, especially with Jedi teacher Qui-Gon Jinn and (surprisingly) Queen Amidala. (Only Anakin proves a little hard on the ears at first, perhaps a little too nasal.) The book's narrative receives the same competent treatment as the dialogue, with the added oomph of both John Williams's stirring score--woven in unobtrusively--and short suites of Lucasfilm sound effects that accompany every spike in the action, whether it's R2's beeping or the metallic bang of blaster fire.

Modern marketing has made movie novelizations a necessary evil and hence suspect, but Terry Brooks proves a deft embellisher of Lucas's well-loved epic, skillfully splicing in scenes and dialogue to fill out the breakneck, foreshadowing-filled story line of Phantom Menace. But that shouldn't be surprising: Brooks has long been the equal or better of Lucas when it comes to storytelling, most notably in his long-lived Shannara series, which began with The Sword of Shannara back in 1977, the same year Star Wars hit theaters. (Running time: 9.5 hours over eight discs) --Paul Hughes

"Fans expecting a typical movie novelization--one that simply parrots the screenplay for Episode I--will be pleasantly surprised. Brooks, with Lucas' cooperation, has created something else altogether; a larger story that includes all of what you've seen onscreen, but also delves deeply into the history of the galaxy and the life and mind of Anakin Skywalker."
--The Star Wars Insider

"BREATHLESS . . . FILLED WITH ACTION FROM PAGE ONE."
--The New York Post

Book Description Hardcover. Condition: New. Dust Jacket Condition: New. 1st Edition. FIRST EDITION/FIRST PRINTING with a complete number line beginning in 1. NEW & UNREAD - SPINE HAS NOT BEEN CRACKED - no flaws or defects - DUST JACKET FEATURING QUEEN AMIDALA - Hardcover in Dust Jacket as issued. DUST JACKET IN PROTECTIVE BRODART COVER - A VERY COLLECTIBLE COPY OF THIS BOOK - ALL BOOKS HAVE BEEN BOXED IN CLIMATE CONTROLLED STORAGE AND HAVE NOT BEEN TOUCHED BY ANY OTHER HUMAN THAN ME FOR AT LEAST THE LAST 10 YEARS - ALL BOOKS ARE SEALED AND BUBBLE WRAPPED AND SHIPPED IN BOXES - YOU CAN BUY HERE WITH CONFIDENCE KNOWING THAT A BUNCH OF STRANGERS HAVE NOT HANDLED YOUR BOOK - PHOTOS POSTED WITH OUR BOOKS ARE STOCK AND DO NOT NECESSARILY REFLECT CONDITION OR EDITION OF BOOK OFFERED FOR SALE. WE DO NOT POST THE PHOTOS OF OUR BOOKS -. Seller Inventory # 009264

Book Description Hardcover. Condition: New. Dust Jacket Condition: New. 1st Edition. FIRST EDITION/FIRST PRINTING with a complete number line beginning in 1. SIMPLY SIGNED THE TITLE PAGE by TERRY BROOKS. Fine in a Fine Dust Jacket. THE BOOK IS IN AS NEW & UNREAD CONDITION - tight, crisp and square, no bumping. Not remainder marked or price-clipped. VERY COLLECTIBLE COPY OF THIS BOOK. DUST JACKET FEATURING DARTH MAUL - PHOTOS OF THE ACTUAL BOOK SENT UPON REQUEST. ALL BOOKS SHIPPED IN BOXES WELL PROTECTED. THIS BOOK IS OFFERED HERE AT AN INTRODUCTORY PRICE FOR OUR RE-GRAND OPENING, IN MAY ALL BOOK PRICES WILL BE ADJUSTED TO REFLECT THE COLLECTIBLE MARKET VALUE. Signed by Author(s). Seller Inventory # 000592