Items related to The Battle for God

Armstrong, Karen The Battle for God 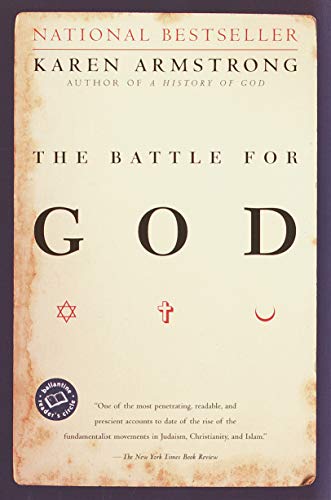 In our supposedly secular age governed by reason and technology, fundamentalism has emerged as an overwhelming force in every major world religion. Why? This is the fascinating, disturbing question that bestselling author Karen Armstrong addresses in her brilliant new book The Battle for God. Writing with the broad perspective and deep understanding of human spirituality that won huge audiences for A History of God, Armstrong illuminates the spread of militant piety as a phenomenon peculiar to our moment in history.

Contrary to popular belief, fundamentalism is not a throwback to some ancient form of religion but rather a response to the spiritual crisis of the modern world. As Armstrong argues, the collapse of a piety rooted in myth and cult during the Renaissance forced people of faith to grasp for new ways of being religious--and fundamentalism was born. Armstrong focuses here on three fundamentalist movements: Protestant fundamentalism in America, Jewish fundamentalism in Israel, and Islamic fundamentalism in Egypt and Iran--exploring how each has developed its own unique way of combating the assaults of modernity.

Blending history, sociology, and spirituality, The Battle for God is a compelling and compassionate study of a radical form of religious expression that is critically shaping the course of world history.

About 40 years ago popular opinion assumed that religion would become a weaker force and people would certainly become less zealous as the world became more modern and morals more relaxed. But the opposite has proven true, according to theologian and author Karen Armstrong (A History of God), who documents how fundamentalism has taken root and grown in many of the world's major religions, such as Christianity, Islam, and Judaism. Even Buddhism, Sikhism, Hinduism, and Confucianism have developed fundamentalist factions. Reacting to a technologically driven world with liberal Western values, fundamentalists have not only increased in numbers, they have become more desperate, claims Armstrong, who points to the Oklahoma City bombing, violent anti-abortion crusades, and the assassination of President Yitzak Rabin as evidence of dangerous extremes.

Yet she also acknowledges the irony of how fundamentalism and Western materialism seem to urge each other on to greater excesses. To "prevent an escalation of the conflict, we must try and understand the pain and perception of the other side," she pleads. With her gift for clear, engaging writing and her integrity as a thorough researcher, Armstrong delivers a powerful discussion of a globally heated issue. Part history lesson, part wake-up call, and mostly a plea for healing, Armstrong's writing continues to offer a religious mirror and a cultural vision. --Gail Hudson

"Former nun Armstrong has done it again. As in her justly acclaimed A History of God (1993), she has written a well-researched, highly informative, accessible, and otherwise superb study of the three great Western monotheistic religions (Judaism, Christianity, and Islam)....[It] is so well written that it is must reading for anyone with a serious interest in contemporary religion."
-- Kirkus Reviews (starred review)

"Excellent...This is a book that will prove indispensible, not only for the student of comparative religion, but also for anyone who seeks insight into how these powerful movement affect global politics and society todya and into the future...Highly intelligent and highly readable book."
-- Baltimore Sun

"Armstong succeeds--brilliantly--in placing fundamentalist movements in a historical context, showing how each is both a product of its times and typical of recurring trends...With her astonishing depth of knowledge and readily accessible writing style, makes an ideal guide in traversing a subject that is by its very nature complex, sensitive and frequently ambiguous. Her unwavering respect for the great faiths and their followers balances nicely with her apparent disdain for extremism in all its forms."
-- San Francisco Chronicle

"Hers is one of the most penetrating, readable and prescient accounts to date of the rise of the fundamentalist movements in Judaism, Christianity and Islam."
-- New York Times Book Review

"Karen Armstrong takes the bull by the horns in this richly detailed study of Fundamentalism's many faces through the ages. Part One reveals the roots; Part Two explores the process by which Judaism, Christianity, and Islam have each occasionally devolved from creative faith to destructive fanaticism. The book is a timely reminder: that religious ideologies and secular advocates of the nation state, having helped create each other, must moderate their conflicts or pay the price -- in violence at the expense of spirit."
-- Michael Wolfe, author of The Hadj and One Thousand Roads to Mecca

"An impressive achievement. Armstrong has mastered a mountain of material, added some brilliant insights of her own, and made it accessible to the general reader."
-- Rabbi Harold Kushner, author of When Bad Things Happen to Good People and How Good Do We Have to Be?

The Battle for God Paperback