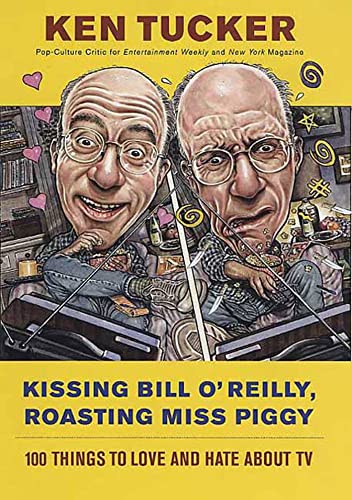 According to Ken Tucker, television is where the mass culture action really is. It's where the weasel goes pop. But for such a fluid, of-the-moment, democratic yet "cool" medium, a strangling accretion of false pieties, half-remembered history, and misplaced nostalgia has grown up around it--the prose equivalent of choking vines. In this book, Ken Tucker shares his zealous opinions about the best and worst of television, past and present

Everyone has firm beliefs about what he loves and hates about TV. If TV fans think the high point of televised political wit was M*A*S*H, or that Johnny Carson was the true king of late-night, Ken Tucker does his damnedest to convince them that they've been hoodwinked, duped by pixilated mists of memory and bad TV criticism.

His dazzling, provocative, and entertaining pieces include LOVES: James Garner as TV's Cary Grant, Pamela Anderson's breasts, David Brinkley--the only anchor who understood that being an anchor was a hollow ego-trip, Heather Locklear as the ultimate TV Personality, Bill O'Reilly--why the biggest asshole on TV is a great TV personality. And from his HATE lists: "The Sopranos" as The Great Saga That Sags, Miss Peggy as media star, Bob Newhart: Human Prozac, Worst Mothers on TV, Star Trek-Sci-Fi suckiness decked out as utopian idealism.

His perception and passion about this much maligned medium gives the lie to passive cliché's like "vegging out in front of the boob tube." This book is the TV version of Michael Moore's Stupid White Men or Bill O'Reilly's The No-Spin Zone.

Ken Tucker is the pop culture critic for New York Magazine and formerly Entertainment Weekly's Critic-At-Large, where he won two National Magazine Awards. He also does weekly reviews on NPR's "Fresh Air with Terry Gross." His reviews have been published in The New York Times, Esquire, Rolling Stone, Vogue, and the Los Angeles Times, among others. The winner of the ASCAP-Deems Taylor Awards for 2003 and 2004, he was also a finalist for the Pulitzer Prize in criticism for his work at the Philadelphia Inquirer. He lives in Berwyn, Pennsylvania.

Media critic Tucker possesses an encyclopedic knowledge of television and a rambunctious enthusiasm for the medium. Like a charming after-dinner companion, he engages readers with a voice that's both literate and casual, pairing 100 loves with 100 hates "arrayed as randomly as the way a viewer switches from channel to channel." He takes on television from its inception to the present, and although some of his opinions are controversial (he argues that Edward R. Murrow was a "showboater" and a "sell-out"), they are, for the most part, thoughtful and passionate. Tucker's tastes run from the predictable (he hates the Brady Bunch) to the surprising (he loves late-night infomercials). He reveals an almost tender humanism with the book's centerpiece: a summary of the best and worst TV moms and dads per decade. Tucker covers popular programs like The Sopranos and Seinfeld, but also unearths some obscure series, such as Buffalo Bill, which ran for only seven episodes in 1983â€"1984, about which he waxes so fervent that readers will hope along with him that it will reappear one day on DVD. Tucker raises the level of TV discourse without intimidation, making this book an entertaining escape as well as a valuable reference for couch potatoes and media-studies students alike.
Copyright © Reed Business Information, a division of Reed Elsevier Inc. All rights reserved.