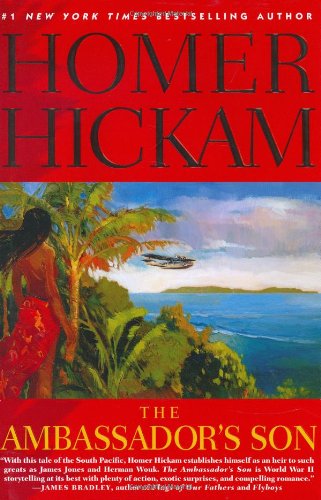 It's 1943 and the Americans and Japanese are fighting a deadly war in the hot, jungle-covered volcanic islands of the South Pacific. The outcome is in doubt and a terrible blow has fallen on American morale. Lieutenant David Armistead, a Marine Corps hero and cousin of the President of the United States, is missing and some say he's gone over to the enemy. Coast Guard Captain Josh Thurlow and his ragtag crew are given the assignment to find Armistead, though not necessarily to bring him back alive. Recruited in the hunt is a tormented and frail PT-boat skipper nicknamed "Shafty" who is also known by another name: John F. Kennedy. When Josh is stranded in the jungles of New Georgia with a mysterious, sensual woman who has a tendency to chop off men's heads, it's up to Kennedy to come to the rescue and complete the mission. But to procure a gunboat, he first has to play high-stakes poker with a young naval supply officer called Nick who happens to be the best gambler in the South Pacific. Nick has another name, too: Richard M. Nixon. Based solidly on historical fact with echoes of James Michener, The Ambassador's Son is a thrilling tale of the South Pacific and adventure fiction at its finest.

From the Back Cover:
The #1 New York Times bestselling author of Rocket Boys continues the wartime saga of Josh Thurlow that began with The Keeper's Son.

It is 1943, and the struggle against Japan rages across the steaming, jungle-choked Solomon Islands. As the fate of the South Pacific hangs precariously in the balance, Lieutenant David Armistead--a Marine Corps hero and cousin of President Franklin Roosevelt--is rumored to have deserted, perhaps to the enemy. For Coast Guard Commander Josh Thurlow, the news is particularly bad. He befriended Armistead while fighting by his side. Now he has orders straight from the top to bring him back or kill him in the attempt.

Pressed into the mission is an officer who couldn't be less like Josh: a shiftless PT boat skipper named John F. Kennedy. To find their elusive quarry, they and Josh's crew of misfits must face dangers as exotic as the lush battleground that surrounds them, including implacable Japanese, an Australian coastwatcher-turned-warlord, and a beautiful seductress who will either steal Josh's heart--or have his head...

"WWII storytelling at its best."--James Bradley, author of Flags of Our Fathers and Flyboys
"Great war novels are often great adventure novels, too, and...The Ambassador's Son qualifies on both counts."
--James Reasoner, author of The Last Good War series
About the Author:
Homer Hickam is the author of the #1 New York Times bestseller Rocket Boys which was made into the acclaimed movie, "October Sky." He is also the author of the bestselling The Keeper's Son and many other books including The Coalwood Way and Sky of Stone. He and his wife and cats share their time between homes in Huntsville, Alabama, and the U.S. Virgin Islands.