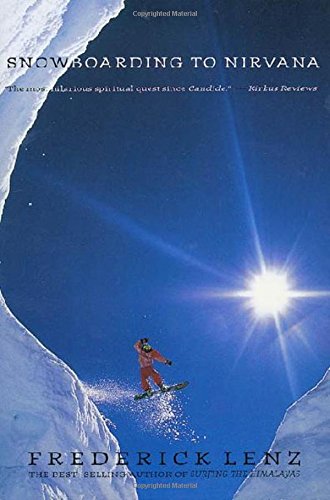 Review:
Once again Frederick Lenz (author of the bestselling Surfing the Himalayas) uses snowboarding as the metaphor for maneuvering through the ice and powder of life. Our snowboarding hero must solve the spiritual riddle of "the missing dimension" before he can reach the next level of enlightenment. Paradoxes, Bruce Lee movies, Tibetan tantric texts, and a love affair with a Danish woman offer the puzzling clues and exotic visuals.
From Kirkus Reviews:
Real-life snowboarder Lenz (Surfing the Himalayas, 1995) takes us, in what may be the most hilarious spiritual quest since Candide, on a most excellent pilgrimage through the mountains of Nepal. Although there is every indication that Lenz has written with a straight face, his sequel--which he dedicates to his dog--reads for all the world like a '90s parody of Gurdjieff or The Razor's Edge. In an introduction, Lenz makes it clear that he is merely fictionalizing his own experiences as a California jock abroad, and anyone who has hung out in Tibetan youth hostels--or simply fantasized over a Lonely Planet guidebook--will recognize the scene. The narrator is a young and not very bright American who comes to the East in search of the perfect mountain to surf and falls under the spell of Master Fwap, a Buddhist monk. Our hero is not particularly given to introspection, but Fwap makes him understand why snowboarding is his destiny and how it will lead him to spiritual completion. Under Fwap's guidance he progresses along the way of purification and enlightenment and improves his snowboarding technique at the same time. He also meets Nadia, a Danish tourist who's spent years mastering Zen Buddhism. Nadia introduces him to Tantric sex, and though he makes good progress under her and Fwap's lead, he eventually rebels: ``While I loved both Master Fwap and Nadia, they just weren't like me. My world was competitive athletics, and theirs was enlightenment.'' So he goes home to Santa Monica, but he finds that he just can't take up his old life as a surfer anymore: Too much has change, there's too much he still doesn't understand. Finally, he decides that he has to go back to Fwap to ``solve the riddle of the missing dimensions.'' Despite long and extremely boring passages about techniques of meditation and asceticism, this may nevertheless be one of the funniest books of the last five years. Lenz has written a comic masterpiece, whether he meant to or not. -- Copyright ©1997, Kirkus Associates, LP. All rights reserved.

Book Description Condition: New. This is a brand new book! Fast Shipping - Safe and Secure Mailer - Our goal is to deliver a better item than what you are hoping for! If not we will make it right!. Seller Inventory # 1XGOUS000TTF_ns