Items related to This We Believe 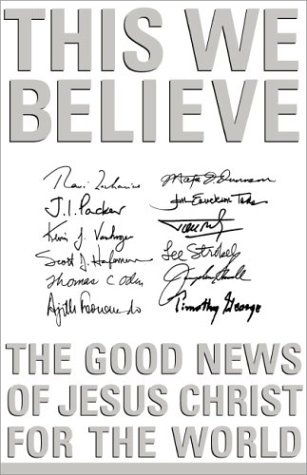 What Every Believer Should Know

As we Christians embark on the third millennium, we face more than ever the need to define our faith. In a world that resists truth and pays the price in escalating evil, Jesus says we are the salt of the earth—people of truth advancing the Gospel of peace. But how well do we understand what we preach?

A group of prominent church leaders and scholars did more than just ask that question. They drafted a clear, definitive statement of the essentials of the Gospel titled “The Gospel of Jesus Christ: An Evangelical Celebration.” Leaders from across the denominational landscape have endorsed it, and the list of names, already impressive, continues to grow. This remarkable show of unity affirms the core beliefs about our salvation that evangelicals hold in common. In the face of our differences, these are what bind us together as the church of Jesus Christ and make the Gospel the Good News of Great Joy.

This We Believe helps you understand the statement’s key points. If you want to know exactly what the Gospel is, this book tells you. Sponsored by the statement’s drafting committee, it includes contributions from such well-known communicators as J. I. Packer, Joseph Stowell, Lee Strobel, Joni Eareckson Tada, and Ravi Zacharias. With clarity and passion, they help you understand the Gospel’s simple, profound, and priceless message.

The book concludes with a copy of the actual statement and a place for you to sign your name in affirmation. It is your invitation to celebrate the tremendous gift of God’s grace to us through Jesus, and our unity as the body of Christ.