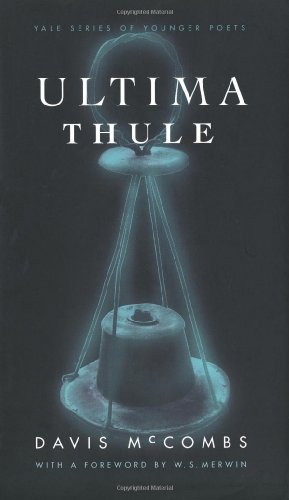 This year's winner of the Yale Series of Younger Poets competition is Davis McCombs's Ultima Thule, which was acclaimed as "a book of exploration, of searching regard ...a grave, attentive holding of a light" by the contest judge, the distinguished poet W. S. Merwin. The poems are set above and below the Cave Country of south central Kentucky, where McCombs lives. This collection is framed by two sonnet sequences, the first about a slave guide and explorer at Mammoth Cave in the mid-1800s and the second about McCombs's experiences as a guide and park ranger there in the 1990s. Other poems deal with Mammoth Cave's four-thousand-year human history and the thrills of crawling into tight, rarely visited passageways to see what lies beyond. Often the poems search for oblique angles into personal experience, and the caves and the landscape they create form a 'personal geology'.

Davis McCombs received a B.A. in 1993 from Harvard University and an M.F.A. from the University of Virginia in 1995. He was a Wallace Stegner Fellow at Stanford University from 1996 to 1998. His poem The River and Under the River was featured in The Best American Poetry 1996; other work has appeared in the Missouri Review, No Roses Review, and the Columbia Poetry Review.

A worthy addition to the recent American literature of place, this year's Yale Younger Poets collection keeps to Mammoth Cave, Ky., where McCombs lives and has worked as a guide. The opening sonnet sequence is written in the persona of Steven Bishop, a slave who was a guide to the caves in the mid-1800s. Whether or not McCombs's period-ventriloquism is accurate, his just slightly stilted diction transforms ordinary observations into pleasing verse. "He told of tides/ and how the ocean is affixed as with a chain/ to moonlight," McCombs writes in "Star Chamber," while "Echo River" makes a more musical point: "By slapping/ the water with the flat of my paddle,/ there comes a sound like the ringing of bells." Building on these understated pleasures, McCombs sneaks broad sexual comedy past the reader in "Visitations": "It is the women/ on the tours that give me pause, delicate/ ghost-white, how, that night, I'm told,/ they wake to find themselves in unfamiliar/ beds, and lost, bewildered, call my name." The poems that follow miss the peculiarly off diction of the opening sequence--and even in those poems, McCombs goes back maybe too often to his key words: "silence," "light" and "night." But the compellingly eccentric word choices and odd history and geography come together often enough to make this the finest Yale Poets selection in years. (Apr.)
Copyright 2000 Reed Business Information, Inc.