Items related to Four Hasidic Masters and their Struggle against Melancholy... 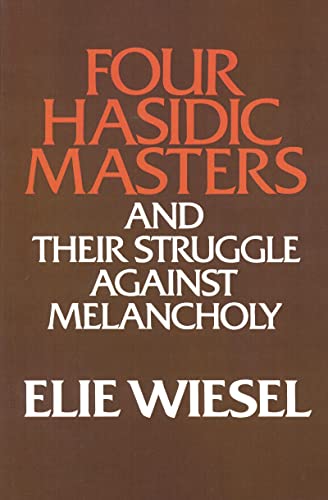 Elie Wiesel (1928-2016) was a professor emeritus at Boston University, where he was the Andrew W. Mellon Professor in the Humanities since 1976. His work on behalf of human rights and world peace has earned him the Nobel Peace Prize (1986), the Presidential Medal of Freedom, and the United States Congressional Gold Medal, among many other honors. In 1986, Marion and Elie Wiesel established The Elie Wiesel Foundation for Humanity, to advance the cause of world peace by creating a new forum for the discussion of urgent ethical issues confronting humanity. Wiesel is the author of more than forty books, several of which have won international awards.

"Elie Wiesel is one of the great writers of this generation." -New York Review of Books

FOUR HASIDIC MASTERS AND THEIR S