Items related to Folk devils and moral panics: The creation of the Mods...

Cohen, Stanley Folk devils and moral panics: The creation of the Mods and Rockers (Sociology and the modern world)

Folk devils and moral panics: The creation of the Mods and Rockers (Sociology and the modern world) 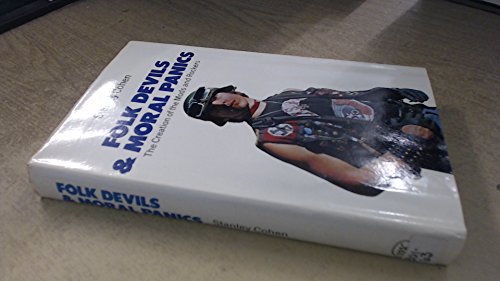 Stanley Cohen's study of Mods and Rockers in the 1960s was a foundational text both in terms of investigating the workings of subcultural groups and identifying the concept of a 'moral panic' generated by the media, which leads to groups being vilified in the popular imagination, and inhibits rational debate about solutions to the social problems such groups represent. The insights Cohen provides into subculture and mass morality are as relevant today as they were when the book was originally published in 1972, as illustrated by the author's introduction for this new edition, in which he tracks moral panics over the last thirty years, commenting on the demonization of young offenders and asylum seekers and on the News of the World's 'name and shame' campaign against paedophiles.
Revisiting the theory of moral panic and exploring the way in which the concept has been used, this new edition features a select bibliography of key texts for further reading. The third edition of Folk Devils and Moral Panics makes available a valuable and widely recommended text.

Professor Stanley Cohen is Emeritus Professor of Sociology at the London School of Economics. He received the Sellin-Glueck Award of the American Society of Criminology (1985) and is on the Board of the International Council on Human Rights. He is a member of the British Academy.

Stan Cohen's `Folk Devils and Moral Panics' was a brilliant and subtle exercise in grounded theory. It has proved consistently fertile for a great deal of new work in sociological analysis the thirty years since its first publication and its critical idea of moral panics proved to be generative for a wide variety of scholars and research fields. In the new introduction to the third edition, an original piece of reflection on the vicarious pathways of its appropriation, and a wonderful reprise of its uses and abuses, Stan Cohen gently but steadily guides us back to its original illuminating intellectual core. Stuart Hall, Emeritus Professor, The Open University.

Shipping: US$ 9.19
From United Kingdom to U.S.A.
Destination, rates & speeds

Folk Devils & Moral Panics. The creation of the Mods and Rockers