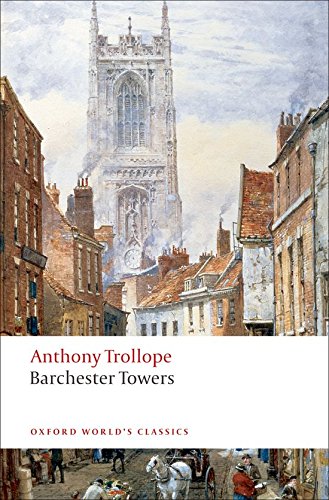 Barchester Towers, Trollope's most popular novel, is the second of the six Chronicles of Barsetshire. The Chronicles follow the intrigues of ambition and love in the cathedral town of Barchester. Trollope was of course interested in the Church, that pillar of Victorian society - in its susceptibility to corruption, hypocrisy, and blinkered conservatism - but the Barsetshire novels are no more `ecclesiastical' than his Palliser novels are `political'. It is the behavior of the individuals within a power structure that interests him. In this novel Trollope continues the story of Mr. Harding and his daughter Eleanor, adding to his cast of characters that oily symbol of progress Mr. Slope, the hen-pecked Dr. Proudie, and the amiable and breezy Stanhope family. The central questions of this moral comedy - Who will be warden? Who will be dean? Who will marry Eleanor? - are skillfully handled with that subtlety of ironic observation that has won Trollope such a wide and appreciative readership.

About the Series: For over 100 years Oxford World's Classics has made available the broadest spectrum of literature from around the globe. Each affordable volume reflects Oxford's commitment to scholarship, providing the most accurate text plus a wealth of other valuable features, including expert introductions by leading authorities, voluminous notes to clarify the text, up-to-date bibliographies for further study, and much more.

Review:
This 1857 sequel to The Warden wryly chronicles the struggle for control of the English diocese of Barchester. The evangelical but not particularly competent new bishop is Dr. Proudie, who with his awful wife and oily curate, Slope, maneuver for power. The Warden and Barchester Towers are part of Trollope's Barsetshire series, in which some of the same characters recur.
From the Publisher:
Founded in 1906 by J.M. Dent, the Everyman Library has always tried to make the best books ever written available to the greatest number of people at the lowest possible price. Unique editorial features that help Everyman Paperback Classics stand out from the crowd include: a leading scholar or literary critic's introduction to the text, a biography of the author, a chronology of her or his life and times, a historical selection of criticism, and a concise plot summary. All books published since 1993 have also been completely restyled: all type has been reset, to offer a clarity and ease of reading unique among editions of the classics; a vibrant, full-color cover design now complements these great texts with beautiful contemporary works of art. But the best feature must be Everyman's uniquely low price. Each Everyman title offers these extensive materials at a price that competes with the most inexpensive editions on the market-but Everyman Paperbacks have durable binding, quality paper, and the highest editorial and scholarly standards.