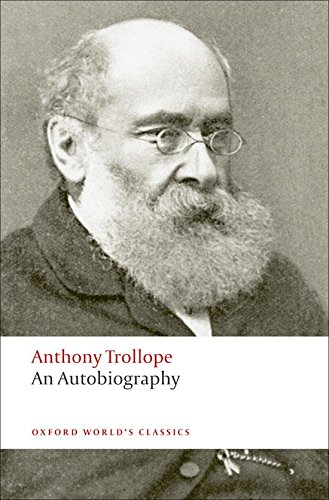 Anthony Trollope is most famous for his portrait of the professional and landed classes of Victorian England, especially in his Palliser and Barsetshire novels. But he was also the author of one of the most fascinating autobiographies of the nineteenth century. Trollope was born in 1815, the son of a formidable mother and a tragically unsuccessful father. Poor, ill-dressed, awkward, and sullen, he was the victim of vicious bullying at Harrow and Winchester. But he managed later to carve out a successful career in the General Post Office while devoting every spare moment (except in hunting season) to writing. How he paid his groom to wake him every morning at 5.30 a.m. and disciplined himself to write 250 words every quarter of an hour has become part of literary legend. His efforts resulted in over sixty books, fortune, and fame, and in An Autobiography Trollope looks back on his life with some satisfaction. The facts he reveals and the opinions he records - about Dickens and George Eliot, politics and the civil service - are as revealing as the judgments he passes on his own character.

About the Series: For over 100 years Oxford World's Classics has made available the broadest spectrum of literature from around the globe. Each affordable volume reflects Oxford's commitment to scholarship, providing the most accurate text plus a wealth of other valuable features, including expert introductions by leading authorities, voluminous notes to clarify the text, up-to-date bibliographies for further study, and much more.

About the Author:
Anthony Trollope (1815-82) became one of the most successful, prolific and respected English novelists of the Victorian era. Some of Trollope's best-loved works revolve around the imaginary county of Barsetshire, but he also wrote penetrating novels on political, social, and gender issues and
conflicts of his day.

Shipping: US$ 7.94
From United Kingdom to U.S.A.
Destination, rates & speeds

Book Description Condition: New. Brand New Paperback International Edition.We Ship to PO BOX Address also. EXPEDITED shipping option also available for faster delivery.This item may ship from the US or other locations in India depending on your location and availability. Seller Inventory # ABBBE-21532

Book Description Condition: New. Books may ship from multiple locations for easy availability and logistics. PO Box orders may take a little longer for deliveries. All orders are shipped via Fedex/DHL with tracking numbers, other than Remote areas/unserviced areas. Seller Inventory # abe-58319

Book Description Condition: New. Brand New, International Edition textbook offers the EXACT same content as the US edition. The book cover, BINDING and jacket design of an International Edition might differ from U.S. versions, but you get the exact same material at incredible cost savings. This item may ship from the US or our Overseas warehouse depending on your location and stock availability. We Ship to PO BOX Address also. Seller Inventory # ABST-21532