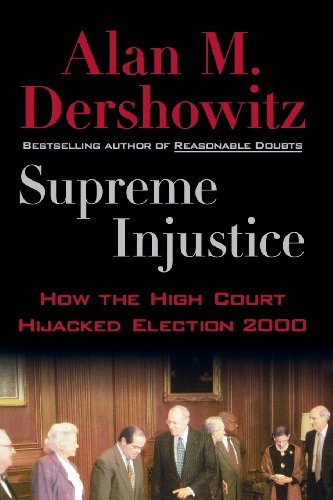 Millions of Americans were baffled and outraged by the U.S. Supreme Court's role in deciding the presidential election of 2000 with its controversial ruling in Bush v. Gore. The Court had held a unique place in our system of checks and balances, seen as the embodiment of fairness and principle precisely because it was perceived to be above the political fray. How could it now issue a decision that reeked of partisan politics, and send to the White House a candidate who may have actually lost the election?
In Supreme Injustice, best-selling author and legal expert Alan M. Dershowitz addresses these questions head-on, at last demystifying Bush v. Gore for those who are still angered by the court's decision but unclear about its meaning. Dershowitz--himself a former Supreme Court clerk--argues that in this case for the first time, the court's majority let its desire for a particular partisan outcome have priority over legal principles. As in his other bestselling books, Dershowitz clarifies complex legal issues, explaining concepts such as "equal protection" and "irreparable harm." Digging deeply into their earlier writings and rulings, Dershowitz proves beyond a reasonable doubt that the justices who gave George W. Bush the presidency contradicted their previous positions to do so.
The most egregious ruling since the Dred Scott Decision, Bush v. Gore has shattered the image of the Supreme Court as a fair and impartial arbiter of important national issues. The resulting loss of the American people's respect, Dershowitz concludes, has severely compromised the Court's role in national affairs. And yet Dershowitz sees some benefit emerging from this constitutional crisis--if we understand its lessons and take action to prevent it from happening again.

Alan M. Dershowitz is the bestselling author of Chutzpah, Reversal of Fortune, Reasonable Doubts, and many other books. After clerking for Judge David Bazelon and Supreme Court Justice Arthur Goldberg, Dershowitz was appointed to the Harvard Law Faculty, where he became a full professor at age 28, the youngest in the school's history. Business Week has described him as "one of [America's] most prominent legal educators." Long famous and infamous for defending controversial clients and positions, he is one of America's best known commentators on legal issues. His articles and syndicated columns appear regularly in newspapers and magazines, and he comments frequently on national television. Dershowitz lives in Cambridge, Massachusetts.

Harvard Law's Dershowitz (Reasonable Doubt, etc.) takes on the now famous, or infamous, Supreme Court decision Bush v. Gore, which ended the recount of votes in Florida and in effect handed the election to Bush. This decision, writes Dershowitz, was "the single most corrupt decision in Supreme Court history," based not on law but on the desire for "partisan advantage" and "personal gain." He launches a three-pronged attack, first on the decision itself, which found that different counties using different methods of hand counts violated the equal protection clause of the 14th Amendment. This is, Dershowitz argues in detail, a bizarre and unique application of this clause with no precedents, no clear victim of discrimination and no clear intent of discrimination, and as the Court stated applicable to this case alone. He next examines prior decisions of the Court in general and the five individual justices who formed the majority and concludes that nothing in their past remotely indicated their actions here. He thus looks to motivation, and while he finds no "smoking gun," he does suggest the justices were sufficiently partisan that they should have recused themselves from the decision. In short, Dershowitz offers a forceful condemnation of the Court's action, in findings that are strikingly similar to those of Vincent Bugliosi's The Betrayal of America (Forecasts, May 21). But where Bugliosi's prose recalls the fire-and-brimstone of a fundamentalist preacher, Dershowitz, at least at times, writes as if he were addressing a constitutional law seminar at Harvard interesting if not always exciting. Still, this is an excellent analysis of a troubling case. If these two books are any indication, controversy over Bush v. Gore is not soon to go away. (June 18) Forecast: Dershowitz, a popular media commentator on legal issues, will be quite busy promoting this new book: On June 18, he'll do the Today Show, Charlie Rose and Rivera Live, and in the following days a host of other national media, as well as national TV and radio satellite tours. Review coverage will undoubtedly be solid. Expect this to pop up on bestseller lists.
Copyright 2001 Reed Business Information, Inc.

Book Description Paperback. Condition: New. Language: English. Brand new Book. Many on both sides of the political fence were mystified by, and in some cases, furious at, the Supreme Court's decision in Bush v. Gore. While legal columnists lined up to decry the court's decision in the days following its ruling, nobody has explained the decision in the context of the court's history of dealing with politically-charged cases, and nobody has looked in detail at how the individual justice's previous writings were or were not reflected in the ruling. In 'Supreme Injustice', Alan Dershowitz will approach the ruling systematically from historical, political , and legal grounds. His ultimate conclusion will be that the Supreme Court did more damage to itself than is apparent now, creating a disturbing precedent that will come back to haunt it, and sullying its and the American judicial system's reputation for fairness at home and abroad. He will also speculate as to why the Court ruled as it did and explore the myriad consequences of the decision. Alan Dershowitz is famous for explaining complicated legal concepts in a serious but accessible style, both in his Harvard Law School criminal law class and in his numerous books.'Supreme Injustice', written in this characteristic style, will be published, in all likelihood, in a period where the 'spirit of bipartisanship' currently celebrated by politicians and the media will almost assuredly have begun to wear off, and in which we may have established with some certainty that Al Gore won Florida. It's likely that this combination of events will leave many who disagreed with the ruling looking for a thoughtful explanation of how and why it happened, and it's our belief that they will turn to this book. Seller Inventory # APC9780195158076

SUPREME INJUSTICE: HOW THE HIGH

Shipping: US$ 31.46
From United Kingdom to U.S.A.
Destination, rates & speeds