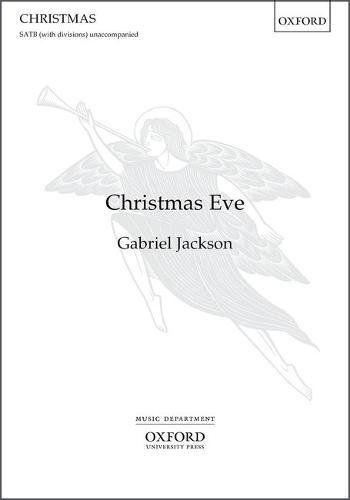 for SATB (with divisions) unaccompanied In this atmospheric piece Gabriel Jackson sets a text by the Victorian poet Christina Rossetti. The first stanza is sung by sopranos only, with expressive chromatic lines evoking the 'darkness' and 'chillness' referred to in the text. The music flowers into four parts for the contrasting second stanza, with rich harmonies and flowing melismas creating a sumptuous texture.

Christmas Eve is a setting of a poem by Christina Rossetti. Though it is only three minutes long, the composer manages to incorporate many of his trademark rhythms and textures, here suitably manipulated to reflect the contrasts and images present in the text. * Geoffrey Webber, Choir & Organ, September 2017 *

Shipping: US$ 4.30
From United Kingdom to U.S.A.
Destination, rates & speeds

Shipping: US$ 10.77
From United Kingdom to U.S.A.
Destination, rates & speeds

Shipping: US$ 16.15
From United Kingdom to U.S.A.
Destination, rates & speeds

Shipping: US$ 26.92
From United Kingdom to U.S.A.
Destination, rates & speeds