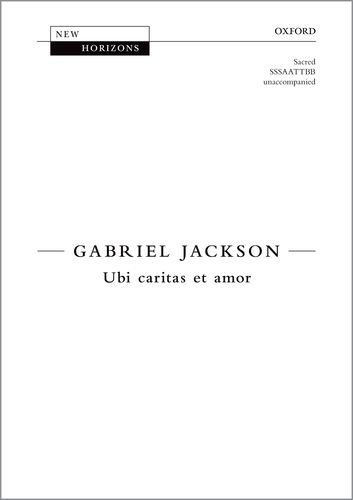 for SATB unaccompanied This anthem for unaccompanied choir juxtaposes the words of the Antiphon for the Washing of Feet on Maundy Thursday with 'The red rose whispers of passion' by the poet John Boyle O'Reilly. Jackson combines lyrical polyphonic phrases for upper and lower voices with atmospheric passages for full choir, frequently accompanied by repeated half-whispered text in free time.

Shipping: US$ 4.46
From United Kingdom to U.S.A.
Destination, rates & speeds

Shipping: US$ 11.17
From United Kingdom to U.S.A.
Destination, rates & speeds

Shipping: US$ 16.76
From United Kingdom to U.S.A.
Destination, rates & speeds

Shipping: US$ 27.93
From United Kingdom to U.S.A.
Destination, rates & speeds