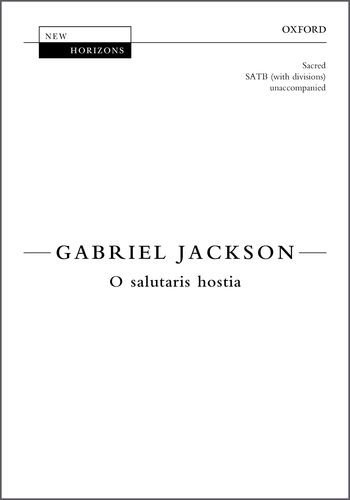 for SATB (with divisions) unaccompanied This reflective and affirmatory communion motet features fluid shifts between 3/4 and 4/4 time signatures and expressive melodic lines that are often underpinned by a drone.

Gabriel Jackson's music is in the repertoire of many cathedral and collegiate choirs, though it has a reputation for being difficult and few parish choirs attempt it. But these two pieces ['Tantum ergo' and 'O salutaris hostia'] would be well within the capability of many choirs, with a bit of effort to learn them initially, and most rewarding for those who try them. The words are of the two hymns traditionally sung at Benediction, but each would make a good communion anthem. They are however a pair, both in E flat and sharing much musical material: indeed the final three-bar Amens are identical. Yet each piece also has a distinctive sound, O salutaris hostia notably featuring drones that underpin the melodies. Both are on YouTube sung by the Byron Consort of Harrow School for whom they were written; do listen to them and enjoy this expressive, contemplative music. * James L. Montgomery, www.rscm.com, June 2017 *

Shipping: US$ 4.44
From United Kingdom to U.S.A.
Destination, rates & speeds

Shipping: US$ 11.14
From United Kingdom to U.S.A.
Destination, rates & speeds

Shipping: US$ 16.71
From United Kingdom to U.S.A.
Destination, rates & speeds

Shipping: US$ 27.84
From United Kingdom to U.S.A.
Destination, rates & speeds