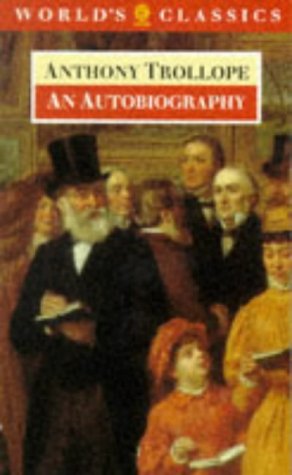 The autobiography of writer Anthony Trollope (1815-1882), which charts the author's unhappy youth and his progress to prosperity and social recognition, with reflections on the hard work involved in becoming a successful novelist. Edited by Michael Sadleir and Frederick Page.

From the Back Cover:
Trollope was born in 1815, the product of a formidable mother and a tragically unsuccessful father who was socially ambitious for his sons. Poor, ill-dressed, awkward, and sullen, he was the victim of vicious bullying at Harrow and Winchester. But he had inherited his mother's determination, and managed later to carve out a successful career in the General Post Office while devoting every spare moment to writing. In this book, Trollope looks back on his life with some satisfaction.
About the Author:
Anthony Trollope (1815-1882) started his writing career while working in Ireland as a postal surveyor. Travelling around the country, Trollope gained knowledge of the country and its people which proved to be useful material for his first two novels, The Macdermots of Ballycloran (1847) and The Kellys and the O'Kellys (1848). Trollope soon started writing fiercely, producing a series entitled Chronicles of Barsetshire. The Warden, the first in the series, was published in 1855. Barchester Towers (1857), the comic masterpiece, Doctor Thorne (1858), Framley Parsonage (1861), The Small House at Allington (1864) and The Last Chronicle of Barset (1867) followed, portraying events in an imaginary English county of Barsetshire. In 1867, Trollope left the Post Office to run as a candidate for the Parliament. Having lost at the elections, Trollope focused on his writing. A satire from his later writing, The Way We Live Now (1875) is often viewed as Trollope's major work, however, his popularity and writing reputation diminished at the later stage of his life. Anthony Trollope died in London in 1882.