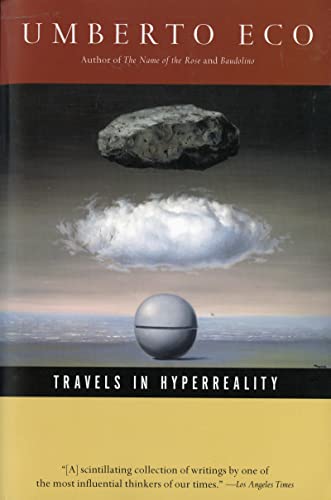 Eco displays in these essays the same wit, learning, and lively intelligence that delighted readers of The Name of the Rose and Foucault’s Pendulum. His range is wide, and his insights are acute, frequently ironic, and often downright funny. Translated by William Weaver. A Helen and Kurt Wolff Book

About the Author:
UMBERTO ECO (1932–2016) was the author of numerous essay collections and seven novels, including The Name of the Rose,The Prague Cemetery, and Inventing the Enemy. He received Italy’s highest literary award, the Premio Strega, was named a Chevalier de la Légion d’Honneur by the French government, and was an honorary member of the American Academy of Arts and Letters.
From Library Journal:
This smorgasbord of 26 pieces ultimately focuses on the boundaries of realism as exemplified by the"hyper reality" of American phenomena like the Madonna Inn, wax museums, San Simeon, theme parks, etc. Though his tone is witty, Eco's purpose remains that of the semiologist. He is concerned about "the systems of signs that we use to describe the world and tell it to one another," and aims both to expose the "messages" of political and economic power and of "the entertainment industry and the revolution industry" and to show us how to analyze and criticize them. Though these essays are generally entertaining, they lack the originality and punch of Barthes's Mythologies and seem unlikely to find the same popular success as Eco's own The Name of the Rose . Richard Kuczkowski, Dir., Continuing Education, Dominican Coll., Blauvelt, N.Y.
Copyright 1986 Reed Business Information, Inc.

Travels in HyperReality (Paperback or Softback)