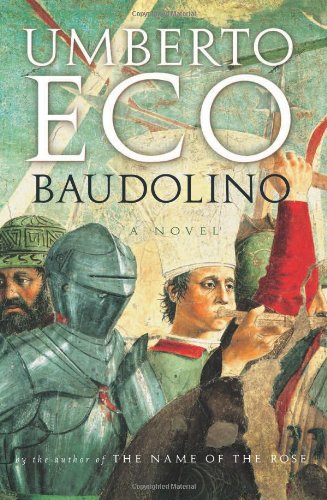 It is April 1204, and Constantinople, the splendid capital of the Byzantine Empire, is being sacked and burned by the knights of the Fourth Crusade. Amid the carnage and confusion, one Baudolino saves a historian and high court official from certain death at the hands of the crusading warriors and proceeds to tell his own fantastical story.

Born a simple peasant in northern Italy, Baudolino has two major gifts--a talent for learning languages and a skill in telling lies. When still a boy he meets a foreign commander in the woods, charming him with his quick wit and lively mind. The commander--who proves to be Emperor Frederick Barbarossa--adopts Baudolino and sends him to the university in Paris, where he makes a number of fearless, adventurous friends.

Spurred on by myths and their own reveries, this merry band sets out in search of Prester John, a legendary priest-king said to rule over a vast kingdom in the East--a phantasmagorical land of strange creatures with eyes on their shoulders and mouths on their stomachs, of eunuchs, unicorns, and lovely maidens.

As always with Eco, this abundant novel includes dazzling digressions, outrageous tricks, extraordinary feeling, and vicarious reflections on our postmodern age. This is Eco the storyteller at his brilliant best.
International Bestseller

Review:
The most playful of historical novelists, Umberto Eco has absorbed the real lesson of history: that there is no such thing as the absolute truth. In Baudolino, he hands his narrative to an Italian peasant who has managed, through good luck and a clever tongue, to become the adopted son of the Emperor, Frederick Barbarossa, and a minister of his court in the closing years of the 12th century. Baudolino's other gift is for spontaneous but convincing lies, and so his unfolding tale--as recounted in 1204 to a nobleman of Constantinople, while the fires of the Fourth Crusade rage around them--exemplifies the Cretan Liar's Paradox: He can't be believed. Why not, then, make his story as outrageous as possible? In the course of his picaresque tale, Baudolino manages to touch on nearly every major theme, conflict, and boondoggle of the Middle Ages: the Crusades; the troubadours; the legend of the Holy Grail; the rise of the cathedral cities; the position of Jews; the market in relics; the local rivalries that made Italy so vulnerable to outside attack; and the perennial power struggles between the pope and the emperor. With the help of alcohol and a mysterious Moorish concoction called "green honey," Baudolino and his ragtag friends engage in typical scholastic debates of the period, trying to determine the dimensions of Solomon's Temple and the location of the Earthly Paradise. And when the Emperor needs support in his claims for saintly lineage, who but Baudolino can craft the perfect letter of homage from the legendary Prester John, Holy (and wholly fictitious) Christian King of the East? A giddy and exasperating romp, Baudolino will draw you into its labyrinthine inventions and half-truths, even if you know better. --Regina Marler
Book Description:
Published in hardcover by Harcourt, October 2002, 0151006903