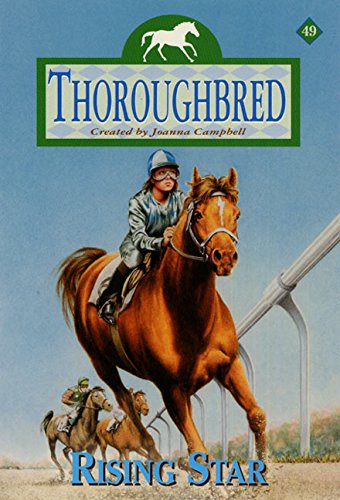 Is Wonder‘s Star a has–been?

No one thought Wonder‘s Star would get well again 埥veryone was certain he would never run another race. The racing press was calling him a has–been.

But Christina Reese never gave up hope. Slowly and steadily she‘s been bringing Star back into racing condition. In her heart of hearts she still has Triple Crown dreams for them, but the Kentucky Derby is only a few months away and they‘re running out of time! Instead of starting with an easy local race, Christina enters Star in a tough Derby prep race, praying that he can withstand the gruelling pace. Is it too much, too soon? Or will Star shine like the champion that he is?

Joanna Campbell appears here with her six-year-old Thoroughbred, Meyersville Magic, known around the barn as CC. He's a son of Horatius out of Northwich by Timothy's Champ and is owned by Cathy Day. Formerly trained for racing, he is now being trained for eventing. Last Year he was the Maine Entry Level Champion in Combined Training.