Items related to Heart of the Sky: Travel Among the Maya

Canby, Peter Heart of the Sky: Travel Among the Maya 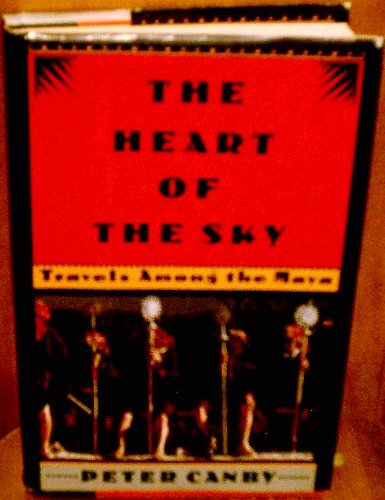 A look at Mayas as they live today in villages throughout Mexico and South America, discussing the religious rituals they still practice, the impact of modern war on the Guatemalan Maya, and the effect of modern evangelism on Mayan religion

Sincere but somewhat self-oriented accumulation of facts and impressions gathered during three years of wanderings among the Maya of Mexico and Central America; by former New Yorker editor Canby. A stranger in a strange land, Canby says that the purpose of his travels--and they were daunting, considering the 30-odd languages in use and other difficulties of access--was to understand the overall situation of the modern Maya, descendants of a sophisticated Mesoamerican civilization still holding fast to tradition after centuries of Spanish and Latino (mixed-blood) oppression. Beginning in the relative tranquility of southern Mexico, Canby found a sense of Maya otherness quickly surfacing when a first solo trip to a native village resulted in missed connections, misunderstandings, and a long walk at dusk back to the starting point. Fortunately, subsequent efforts proved more successful, including a visit to guerrilla country along the river border between Mexico and Guatemala with a French ecologist working for the Guatemalan government; explorations with gringo experts of temples and cities built during the classic Maya period (7th-8th centuries A.D.); and a number of observations based on participation in native rituals and ceremonies, including the Holy Week appearance of the old-man underworld god, Maxim˘n. Using scholarly texts for historical background and contemporary analysis, Canby evokes in colorful and sympathetic detail the remarkable story of a people's will to survive, but barriers between the Anglo and Maya worldviews remain largely intact, so the result of the author's trip is less a journey to the heart of the Maya than a mapping of its periphery. A patchwork of solid research and stirring images, but overly impressionistic and personal, and more frustrating than fulfilling. (Fifteen maps.) -- Copyright ©1992, Kirkus Associates, LP. All rights reserved.

Part travelogue, part anthropological study and part cultural history, this book attempts to place the extant seven million Maya of Mexico and Central America--most live in Guatemala and Honduras--into a contemporary perspective. Canby finds that far from dying out, as is commonly supposed, the Maya have made accommodations to modern life, achieved a strange blend of their ancient religion with Catholicism and survived genocidal onslaughts by the Guatemalan military in the past decade. A New Yorker staff writer, he painstakingly details the history of the Mayan people, but in quoting scholars, archaeologists and the Maya themselves he writes in such polished blocks of prose as to be stylistically irritating. The book, nonetheless, is a clear-sighted and politically responsible piece of work. Canby, who is obviously courageous and adventurous, even foolhardy at times, managed to learn a great deal about this tenacious, much-abused people.
Copyright 1992 Reed Business Information, Inc.

HEART OF THE SKY: TRAVEL AMONG T

Heart of the Sky: Travel Among the Maya Canby, Peter