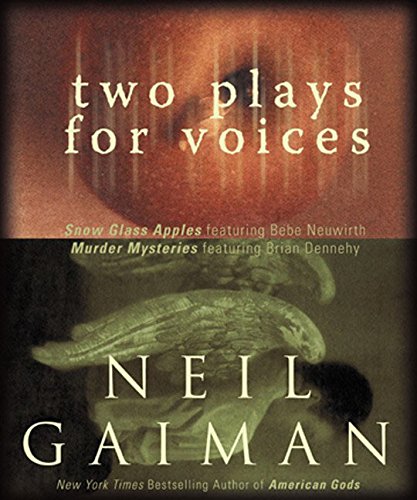 "The joy for me is knowing that somebody can have this strange audio experience. They're getting something as good as you get from radio." - Neil Gaimen

Produced by the Sci-Fi Channel and Seeing Ear Theatre - these two plays are adapted for voice by Neil Gaiman from two of his short stories (both stories can be found in Smoke & Mirrors).

SNOW GLASS APPLES: Once upon a time there lived a young princess with skin as white as snow, with hair as black as coal, with lips redder than blood. Most people think they know what happens to this young unfortunate girl. Most people are wrong. Tony-award winning actress Bebe Neuwirth (Chicago, Sweet Charity, and TV's Cheers) stars as a wise Queen who wants nothing more than to reign over her kingdom peacefully but is forced to match wits with an inhuman child who has an unnatural taste for blood.

Full Cast List:
Bebe Neuwirth as the Queen ; Martin Carey as the Huntsman; Mark Evans as the Prince; Merwin Goldsmith as the Lord of the Fair; J.R. Horne as the Archbishop & Friar; Alissa Hunnicutt as the Maidservant; Randy Maggiore as a Soldier; Kate Simses as the Princess; Nick Wyman as the King

MURDER MYSTERIES: In this mystery noir set in heaven's City of Angels before the fall, the first crime has been committed. It is an awful one. While the angelic hosts labor to create the world and its workings, one of their number is mysteriously slain by one of their own. Raguel, Angel of Vengeance, is mandated by Lucifer to discover both motive and murderer in this holy dominion that had so recently known no sin.

Neil Gaiman is the #1 New York Times bestselling author of more than twenty books, including Norse Mythology, Neverwhere, and The Graveyard Book. Among his numerous literary awards are the Newbery and Carnegie medals, and the Hugo, Nebula, World Fantasy, and Will Eisner awards. Originally from England, he now lives in America.