Items related to Business the AOL Way: Secrets of the World's Number... 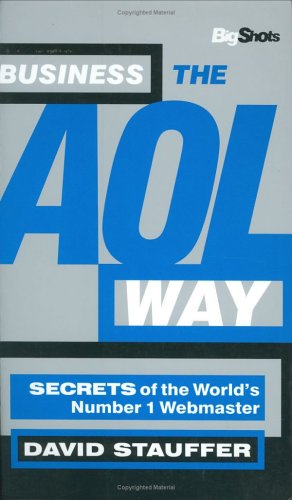 (AOL is the world s single most successful internet based company, whether measured by number of customers, annual revenues, or profits. CEO Steve Case is a visionary, a charismatic leader who has taken AOL from obscurity to become the pre eminent new media brand in less than 10 years.
In Business the AOL Way, David Stauffer examines this remarkable success story. While it may seem today that AOL has been a prominent name in the new media world for as long as Apple or Microsoft, AOL in fact had fewer than 200,000 subscribers as recently as 1993. That number increased by a factor of 7,000% over the following five years. Before most executives even knew what the internet was, Steve Case had clearly seen its business potential. And while most of the superstar companies of the dot com world can only tell their investors of profits to come at some indefinite future date, AOL has achieved profitability that many believe can only grown stronger in coming years)

Buy Used
Condition: Good
This is an ex-library book and... Learn more about this copy

Book Description Condition: Good. This is an ex-library book and may have the usual library/used-book markings inside.This book has soft covers. In good all round condition. Please note the Image in this listing is a stock photo and may not match the covers of the actual item,400grams, ISBN:9781841120881. Seller Inventory # 5438030

Shipping: US$ 14.31
From United Kingdom to U.S.A.
Destination, rates & speeds

Shipping: US$ 24.11
From United Kingdom to U.S.A.
Destination, rates & speeds