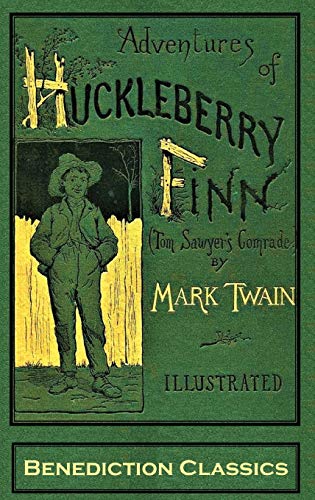 Book Description Hardback. Condition: New. Language: English. Brand new Book. ADVENTURES OF HUCKLEBERRY FINN. Complete and unabridged. Includes 174 original illustrations and original cover. Crisp text set in modern easily read font.Mark Twain's characters are surprising, unforgettable and truly human. The character Huckleberry Finn is based on one of Twain's childhood friends. Twain writes "In Huckleberry Finn I have drawn Tom Blankenship exactly as he was. He was ignorant, unwashed, insufficiently fed; but he had as good a heart as ever any boy had. His liberties were totally unrestricted. He was the only really independent person-boy or man-in the community, and by consequence he was tranquilly and continuously happy and envied by the rest of us. And as his society was forbidden us by our parents, the prohibition trebled and quadrupled its value, and therefore we sought and got more of his society than any other boy's." It is little surprise then that children are perennially drawn to Huck and his adventures. The dialogue faithfully reproduces the common speech of his day. Twain explains, "In this book a number of dialects are used, to wit: the Missouri negro dialect; the extremest form of the backwoods Southwestern dialect; the ordinary 'Pike County' dialect; and four modified varieties of this last. The shadings have not been done in a haphazard fashion, or by guesswork; but painstakingly, and with the trustworthy guidance and support of personal familiarity with these several forms of speech." The plot combines adventure, suspense and mischief with the darker side of humanity: murder, deceit, brutality and racial prejudice. It is a great adventure story and much more, enlivened by Twain's trademark humor and observations of human nature.Mark Twain, the pen name of Samuel Langhorne Clemens (November 30, 1835 - April 21, 1910) was an American writer, humorist, entrepreneur, publisher, and lecturer. He was lauded as the "greatest humorist the United States has produced," and William Faulkner called him "the father of American literature". This original edition contains E. W. Kemble's 174 original illustrations and the original cover. Twain's record of reported speech precisely captures the language of the Antebellum South, and so, as one might expect, there are words that are unacceptable today. Since times have changed, these have also been changed, but otherwise the text is original. Seller Inventory # LHB9781789431148

Shipping: US$ 9.75
From United Kingdom to U.S.A.
Destination, rates & speeds