Items related to The Complete Book of Beer Drinking Games (And Other... 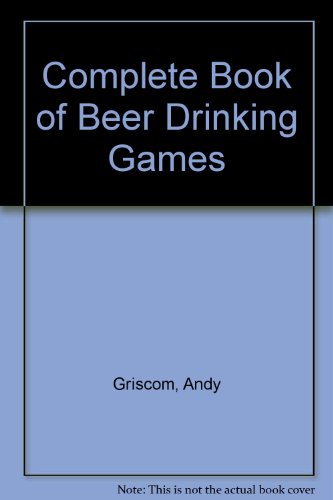 The Complete Book Of Beer Drinking Games lives up to its name with descriptions of fifty hilarious beer games like "Thumper and Quarters" to obscure but wild matches like "Slush Fund" and "Boot-a-Bout". The Complete Book Of Beer Drinking Games celebrates a popular pastime for "towns & gowns" young adults with 144 pages of pure nonsense, including photos of four recent Presidents quaffing brew, dozens of synonyms for puking, a complete semester of college classes based entirely on beer, and, of course, the most thorough encyclopedia of rues and regulations to the best party games of all time. Although The Complete Book Of Beer Drinking Games does celebrate enthusiastic partying, the authors are adamantly opposed to excessive drinking, and especial to drunk driving. A graphic photo of a car wreck and a blunt warning against DUI preface the book. -- Midwest Book Review

Book Description Paperback. Condition: Good. Connecting readers with great books since 1972! Used books may not include companion materials, and may have some shelf wear or limited writing. We ship orders daily and Customer Service is our top priority!. Seller Inventory # S_282923019

Book Description Condition: Good. Good condition. A copy that has been read but remains intact. May contain markings such as bookplates, stamps, limited notes and highlighting, or a few light stains. Seller Inventory # D06D-00349