Items related to Fields of Fig and Olive: Ameera and Other Stories of...

Abdul-Baki, Kathryn K. Fields of Fig and Olive: Ameera and Other Stories of the Middle East

Fields of Fig and Olive: Ameera and Other Stories of the Middle East 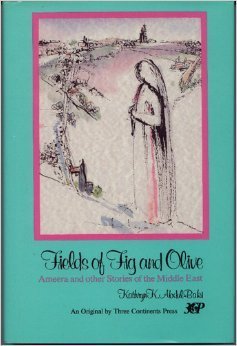 A collection of fourteen stories portraying Arab life in the 1930 to 1990 period in the Middle East.

From Kirkus Reviews:
An uneven but promising debut collection of sometimes beautifully crafted stories, with Middle Eastern settings, from an Arab-American writer living in the US. Though set in the Middle East and concerned often with traditional Arab conventions and custom, the stories also reflect contemporary tensions within the society, especially between men and women. Two pieces in particular--``Nariman,'' in which a young schoolgirl is raped by a soldier in her family's Beirut apartment; and ``Flight,'' where a middle-aged teacher, overwhelmed by the effects on her pupils and herself of the decades-long civil war, contemplates emigration--describe a modern Arab world where women have more freedom and choices. Other pieces--like ``The Marriage of Sima,'' in which the narrator wonders ``Whether I would one day be made to break with my own parents as she had and, if I did, whether I would find it in me to flourish so vibrantly among strangers''; and ``Ameera''--are about women expected to fulfill traditional roles within the family. Other notables include: ``Skiathos,'' in which an aging Turkish diplomat thinks he has finally met his true love; ``Hala,'' whose narrator, a young Lebanese girl now living in Kuwait, recalls the death of her baby brother (``the one sparkle of joy in my life''); and ``The Wedding,'' which describes the complicity of a mother and daughter in bringing off a marriage. Place and character are vividly evoked and the distinct flavor of a different culture well caught in a collection that even so, perhaps by its nature, is touched by the already familiar. -- Copyright ©1991, Kirkus Associates, LP. All rights reserved.

FIELDS OF FIG AND OLIVE: AMEERA