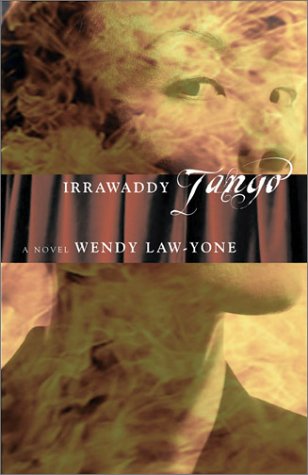 Irrawaddy Tango, a pepper-tongued, tango-dancing Asian beauty rises from a village girlhood to become the wife of her country's dictator and then a leader of the rebel forces arrayed against him. Tango captures the attention of an ambitious colonel --the self-proclaimed Supremo--while dancing at a talent contest. Once married, she is forced to endure the cruelties of a ruthless and foolish husband, is kidnapped by rebel forces, recaptured and brutally punished by her husband's military clique, and eventually exiled to America. Her return to the fictional Republic of Daya (clearly Burma) brings about the destruction of her husband and his dictatorship. Irrawaddy Tango tells the unsettling tale of powerful men and powerless women. It evokes as well the harshness of exile, revealing the misunderstandings between East and West and by doing so captures the intensity of living between the two.

Tango, the picaresque and sassy heroine of Law-Yone's second novel (after The Coffin Tree ), rides her flair for dancing from obscurity in the backwater village of Irrawaddy to the highest position available to a woman in the fictional Asian nation of Daway: wife of its sadistic, stupid dictator. She later becomes a political prisoner, an exile and, finally, a murderer, caught up in a whirlwind of events that leaves her alienated, rootless and reduced to an existential stupor. Relentlessly wisecracking and notably lacking in insight, Tango's first-person narration quickly wears thin; the first three quarters of the text completely fail to prepare the reader for her striking transformation into a world-weary matron at the novel's close. Although later chapters have greater focus and narrative tension, an excessive reliance on literary allusion rings false, since nothing in Tango's background suggests she would have such knowledge. Law-Yone tackles a worthy theme--the inevitable, destructive alienation felt by thoughtful Third World exiles both abroad and at home--and the novel's final section is gripping, but the bulk of it reads like a first draft.
Copyright 1993 Reed Business Information, Inc.

Book Description Condition: Very Good. Former library book; may include library markings. Used book that is in excellent condition. May show signs of wear or have minor defects. Seller Inventory # 39493461-75