Items related to One of a Kind: The Rise and Fall of Stuey ',The...

Dalla, Nolan One of a Kind: The Rise and Fall of Stuey ',The Kid', Ungar, The World's Greatest Poker Player

One of a Kind: The Rise and Fall of Stuey ',The Kid', Ungar, The World's Greatest Poker Player 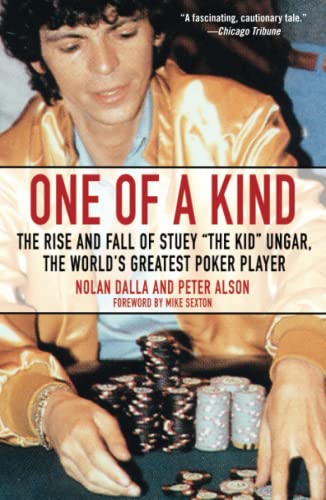 Now in paperback comes the first and authorized biography of Stuey Ungar, the greatest card player of all time, who was backed by the Mob in New York before moving to Las Vegas where he won the World Series of Poker three times, then died mysteriously in a seedy motel on the Vegas strip at the age of 45.

He was the Jim Morrison of the casino, a legend before he was of legal age. Stuey Ungar, the son of a Jewish bookie on Manhattan's Lower East Side, dropped out of high school to become an underground card-table sensation, eventually taking out every top gin-rummy player on the East Coast. Bankrolled by the Genovese crime family, Stuey would soon travel around the country in search of new opponents and opportunities—including poker. He would go on to win the World Series of Poker a record three times. And then his luck began to run out.

One of a Kind is the startling tale of a man who won at his game and lost control of his life. Whether tossing away his winnings at the racetrack or on a single roll of the dice, Stuey was notorious for gambling every single dollar in his pocket. Though he had won an estimated $30 million in his lifetime, Stuey had no bank account, not even a home address. He was found dead in a Vegas motel—with $800 in cash on his person, the only money he had left—at the age of forty-five.

An intimate, authorized biography—Nolan Dalla was commissioned by Stuey in 1998 to pen his story, resulting in hundreds of hours of taped interviews and conversations—One of a Kind illuminates the dark genius of one of poker's most memorable figures.

Nolan Dalla is the lead sports handicapper for Casino Player and has written for Gambling Times, Card Player, Poker Digest, Poker Pages, Poker Player, and The Intelligent Gambler. He was the head of public relations for Binion's Horseshoe in Las Vegas and is now media director for the World Series of Poker. A native Texan, he currently resides in Las Vegas.

Peter Alson is the author of the highly acclaimed memoir Confessions of an Ivy League Bookie and coauthor of One of a Kind, a biography of the poker champion Stuey Ungar, and Atlas: From the Street to the Ring: A Son's Struggle to Become a Man. Alson's articles have appeared in many national magazines, including Esquire, Playboy, and The New York Times Magazine. He lives in Brooklyn with his wife, Alice, and their daughter Eden.

No one noticed him at first.

It was May 1997, fifteen hours before the start of the $10,000 buy-in at the World Series of Poker (WSOP) championship event, and in the satellite area, a low-lit collection of baize-topped hold'em tables in the back of Binion's Horseshoe casino, most of the players were too caught up in the business at hand to pay attention right away.

When one player did at last recognize the diminutive man wandering around the periphery of the room, he muttered something to the fellows at his table, and a couple of them turned to look. Then a couple more looked.

Stu Ungar, the two-time world champion of poker, was not unaccustomed to drawing stares in a poker room. The man they called "the Kid" was the most feared tournament player in poker history. Yet here it was, the eve of the championship, and this was the first time he'd been sighted during the more than three weeks that poker's greatest stars had been gathered at the Horseshoe in Las Vegas for their annual shoot-out.

As Stuey continued to navigate his way through the room, the whispers grew louder. He tried to ignore the eyes that widened at the sight of him. It wasn't easy. He had once been dubbed in print the "Keith Richards of poker," both for his rock-star aura and for his spindly little-boy body and mop-topped boyish good looks, and he had always loved the attention. But this was different. This was not the kind of attention he was used to. Starstruck awe had been replaced by morbid fascination. Those who knew him were appalled by what they saw. Up close, the boyishness was gone. Stuey's face was sickly white, ravaged by years of hard, careless living and drug abuse. One side of his nose was collapsed from snorting too much cocaine. His skin was papery and looked as if it might rip at the slightest touch. More disturbing, in a way, was how he'd let himself go. He was unshaven. His fingernails were long and dirty. His clothes looked slept-in. And he smelled.

For a man who had won millions of dollars playing in the highest-stakes games in Las Vegas, it was humbling to have to walk into this room this way -- and worse still because the millions were gone, squandered on drugs and outrageous sports wagers. In a matter of hours, Jack McClelland, the tournament director, would utter his famous command "Shuffle up and deal," and the twenty-eighth annual championship would commence. Unless Stuey could persuade someone to back him, he'd be watching the action from the rail with the rest of the poker world's unwashed masses.

The night before the main event was a time of feverish desperation in the satellite area. Players who hadn't yet won an entry were taking last-gasp shots at scoring a seat in an event that happened only once a year. Most of the players who had already won seats, or who had the luxury of buying in for the full ten grand, were upstairs in their rooms, or across the street at the Golden Nugget. They were resting up, getting a good night's sleep, taking baths, getting massages. They knew that they were going to need every ounce of energy they could muster if they wanted to make it through the grueling four-day marathon.

Those still playing satellites were the luckless losers who hadn't been able to catch a break for three weeks but didn't want to admit defeat. They were stubbornly pursuing the dream -- a dream that, even if they achieved it, would put them at a huge disadvantage relative to the rest of the field. Imagine a runner needing to win a three-mile race in order to qualify for a thirty-mile race later the same day against opponents who had qualified weeks ago and were fully rested. That was the uphill task facing most of the men (and the few women) now in the room.

Better in than out, though, despite the disadvantage -- especially for a two-time world champion. Stuey saw Billy Baxter getting up from a table across the room and made a beeline for him. Baxter, a large, cheerful southerner, was a great lowball player who had won so many gold bracelets in deuce-to-seven lowball draw at the WSOP that one player jokingly began calling it the "Billy Baxter benefit tournament." Oddly enough, Baxter had never played in the $10,000 event, but after entering a $1,050 buy-in satellite (essentially, a one-table mini-tournament to get into the tournament) on a whim, he had managed just moments before to win it. He was now the proud owner of a slip of paper entitling him to a seat in the Big One; not surprisingly, he was in a good mood.

"Hey, Billy," Stuey said, drawing near. "Lyle turned me loose. I'm giving you the first shot at backing me tomorrow." Stuey's voice was pure Lower East Side New York -- a guttural, rapid-fire, wiseguy mumble that recalled Mugsy from the old Bowery Boys shorts. Stuey was referring to Lyle Berman, a multimillionaire businessman, who would be inducted into the Poker Hall of Fame in 2002 and would become a driving force behind the Travel Channel's World Poker Tour. Berman had backed Stuey selectively in the past, but his timing had always been lousy, even when the Kid was on top of his game. Berman had wanted no part of Stuey in his current condition and had already told him so.

Baxter's luck with Stuey had been a bit better through the years, though on at least one occasion, in 1990, he experienced the downside of backing a drug abuser when Stuey failed to show up for the final two days of the WSOP. A sharp businessman and professional sports bettor, Baxter considered himself Stuey's friend. Their friendship complicated matters. "I liked Stuey," Baxter said. "I always wanted to help him out when I could."

In this case, however, even flushed with victory, Baxter did not feel comfortable. Stuey looked horrible. It was hard to imagine him finishing the four-day event, much less winning it. Baxter wasn't the type to throw away ten grand on a gesture.

"Stuey, I haven't been going all that great in sports lately," he said. "Try to get it from someone else. I mean, I'm sure you can get a hundred people in this room to back you."

At one point that had certainly been true, but no longer. A quick look around the room forced Stuey to face the truth: he was no more than an object of pity here, maybe even a butt of jokes. He turned and slunk out of the casino. No one knows exactly where he went, but somehow he managed to scrape together a few bucks and buy a vial of crack. Midnight found him in a den in the worst part of town, sucking on a crack pipe, trying to forget about the depths to which he had sunk and all that he had lost.

It seemed almost impossible to believe that four days later he would be back at the Horseshoe, a phoenix risen from the ashes, celebrating one of the greatest comebacks of all time.Copyright ©2006 by Nolan Dalla and Peter Alson

One of a Kind: The Rise and Fall of Stuey ',The Kid', Ungar, The World's Greatest Poker Player Paperback

One of a Kind: The Rise and Fall of Stuey ', the Kid', Ungar, the World's Greatest Poker Player (Paperback or Softback)

Book Description Paperback or Softback. Condition: New. One of a Kind: The Rise and Fall of Stuey ', the Kid', Ungar, the World's Greatest Poker Player. Book. Seller Inventory # BBS-9780743476591

One of a Kind: The Rise and Fall of Stuey ',The Kid', Ungar, The World's Greatest Poker Player