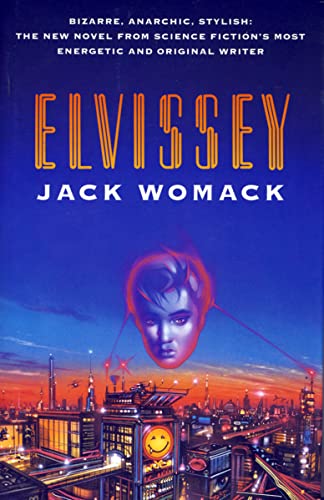 A troubled couple sets out from a dismal future to retrieve Elvis Presley from an oddly different 1954. They need the King to be a savior to what's left of humanity, but he's a murderous freak with no desire to be anyone's god. Elvissey is set in Jack Womack's maybe-not-cyberpunk future, where the Dryco corporation runs everything, and everyone has been or will be "regooded," for their own good. Womack writes in an evolved language, full of odd verbs and newspeak: "He unpocketed a bottle of small blue pills; Dryco's standard eyedots and smile were imprinted upon each tablet. Three hours sole could pass between dosings, no more, no less. Swallowing dry, he fixed a doorways stare; shook, and resettled.... Regooded or not, his unscratchables still itched."

This is a bleak tale, buzzy and complex, full of human failings. Elvis is a disgusting jerk. The United States of Dryco is horrifying and manipulative. And Iz and John are mutually lonely, despairing in their failing marriage, and betrayed by Dryco. Despite its darkness--or maybe because of it--you owe it to yourself to read Elvissey. Womack is one of the most interesting writers in the business, and nobody does cultural science fiction funk like he does. --Therese Littleton

Womack ( Ambient ) astounds and entertains in this adventure featuring a young Elvis Presley kidnapped into a future in which he becomes a deity. Though the plot suggests the ridiculous, this is, in fact, a deep, often theological, reflection on love, betrayal and commercially inspired nihilism. The narrator is Isabel, a high-level operative for Dryco, a mind-manipulating multinational conglomerate in a parallel future. Seeing control of various Elvis-worshiping sects as important to its domination of the globe, Dryco sends Isabel and her husband through a "Window" to kidnap young Elvis from another parallel universe. They find the King-to-be of Rock 'n' Roll standing over the body of the mother he has just murdered, and he takes the couple on a bloody road trip through the South before they arrive in Dryco's world. Though Elvis is happy to have escaped murder charges, his gnostic philosophy makes him a reluctant messiah, and Dryco goes to extremes in convincing him to go public. From loony beginning to gripping climax, Womack has found a brilliant vehicle through which to examine relationships, race, popular culture and a host of other topics, and forces us to contemplate whether the dystopian worlds he evinces are not, in fact, merely heterotopian.
Copyright 1992 Reed Business Information, Inc.

Shipping: US$ 14.87
From United Kingdom to U.S.A.
Destination, rates & speeds

Shipping: US$ 14.99
From United Kingdom to U.S.A.
Destination, rates & speeds

Book Description Hardcover. Condition: Good. Signed. First Edition. Connecting readers with great books since 1972. Used books may not include companion materials, some shelf wear, may contain highlighting/notes, may not include cdrom or access codes. Customer service is our top priority!. Seller Inventory # S_330519565

Book Description Condition: Good. A+ Customer service! Satisfaction Guaranteed! Book is in Used-Good condition. Pages and cover are clean and intact. Used items may not include supplementary materials such as CDs or access codes. May show signs of minor shelf wear and contain limited notes and highlighting. Seller Inventory # 0246138394-2-4

Shipping: US$ 29.17
From United Kingdom to U.S.A.
Destination, rates & speeds