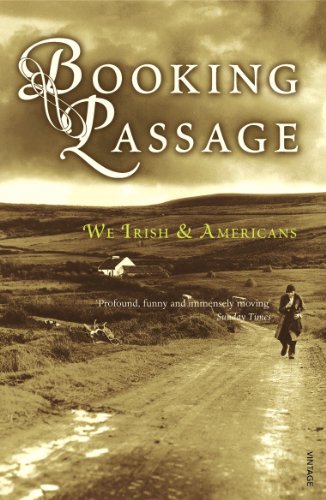 In February of 1970, Thomas Lynch, aged twenty-one, bought a one-way ticket to Ireland. He landed in the townland of Moveen, at the edge of the ocean in West Clare, outside the thatched cottage that his great-grandfather had left late in the nineteenth century with a one-way ticket to America. Tommy and Nora Lynch, Thomas Lynch's elderly, unmarried, distant cousins welcomed the young American 'home'. In the words of the author, 'it changed my life'. Booking Passage is part travelogue, part cultural study, part memoir and elegy, part guidebook for what Lynch calls 'fellow pilgrims' working their way through their own and the larger histories. It is a magnificent hymn of praise to Ireland.

Thomas Lynch's poems, essays and stories have appeared in The Atlantic and Granta, Harper's and the Times (of London, New York, Ireland and L.A.) and elsewhere. He has published four poetry collections and a collection of stories, Apparition & Other Late Fictions (published by Jonathan Cape), as well as works of non-fiction, including The Undertaking: Life Studies from the Dismal Trade. He lives in Milford, Michigan and in Moveen, West Clare.

Undertaker-cum-poet Lynch (Bodies in Motion and at Rest) recalls his long romance with Eire and how it has affected his life in this compelling memoir. He takes off for the Emerald Isle early in 1970 to meet his people, who live on the edge of the Atlantic in County Clare. He stays with his elderly cousins, Nora and Tommy, a brother and sister who never married. The humble cottage has no water and is heated by a turf fire. Here the young Yank absorbs his culture shock and learns how life is lived without television, cars and other modern distractions. After Tommy's death, Lynch and Nora become closer, and he begins to bring the 20th century into the house in the form of running water. Along the way he tells the story of the Lynches of County Clare: how they survived "starvation, eviction and emigration—the three-headed scourge of English racism"—and the pain of diaspora as they emigrated to the U.S. Along the way Lynch examines his own life: his love-hate relationship with the misogynist Catholic Church and pedophilic priests; his battle with alcoholism; the breakup of his marriage and remarriage; and his unusual love of the undertaking trade. This is a deeply thought-out book filled with poetry, pathos, triumph and lots of Irish laughter.
Copyright © Reed Business Information, a division of Reed Elsevier Inc. All rights reserved.

Book Description Condition: New. 2006. Paperback. DIASPORA. In February of 1970, Thomas Lynch, aged twenty-one, bought a one-way ticket to Ireland. This work is part travelogue, part cultural study, part memoir and elegy, and part guidebook for what Lynch calls 'fellow pilgrims' working their way through their own and the larger histories. It is a hymn of praise to Ireland. Num Pages: 320 pages, Illustrations, maps. BIC Classification: 2ABM; BGL; DSBH; DSC. Category: (G) General (US: Trade). Dimension: 132 x 196 x 21. Weight in Grams: 256 300pp. . . . . Books ship from the US and Ireland. Seller Inventory # 9780099428190