Mukherjee, Bharati The Holder of the World 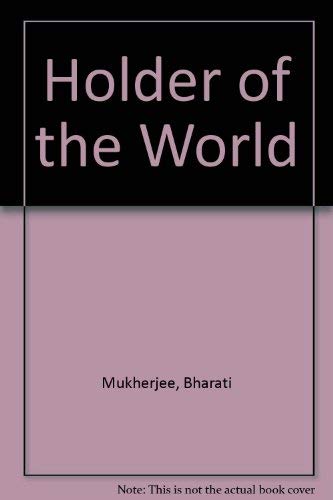 "An amazing literary feat and a masterpiece of storytelling. Once again, Bharati Mukherjee prove
she is one of our foremost writers, with the literary muscles to weave both the future and the past into a tale that is singularly intelligent and provocative."
--AMY TAN
This is the remarkable story of Hannah Easton, a unique woman born in the American colonies in 1670, "a person undreamed of in Puritan society." Inquisitive, vital and awake to her own possibilities, Hannah travels to Mughal, India, with her husband, and English trader. There, she sets her own course, "translating" herself into the Salem Bibi, the white lover of a Hindu raja.
It is also the story of Beigh Masters, born in New England in the mid-twentieth century, an "asset hunter" who stumbles on the scattered record of her distant relative's life while tracking a legendary diamond. As Beigh pieces together details of Hannah's journeys, she finds herself drawn into the most intimate and spellbinding fabric of that remote life, confirming her belief that with "sufficient passion and intelligence, we can decontrsuct the barriers of time and geography...."
From the Trade Paperback edition.

About the Author:
Bharati Mukherjee is a professor of English at the University of California at Berkeley.
From Kirkus Reviews:
From Mukherjee (The Middleman, 1988; Jasmine, 1989, etc.), the tale of a 17th-century American girl who ends up an emperor's mistress in India. Hannah Easton, born in 1670 in the forests of Massachusetts, at age 15 moves to Salem with adoptive parents after her father dies of a bee sting and her mother--during the French and Indian War--runs off with a lover from the Nipmuc tribe. Having witnessed scalpings and worse, and harboring the terrible secret of her mother's having gone over to the ``barbarians,'' Hannah is a deeper well than most young girls, suffering trance-like illnesses but also excelling at needlework--including the surgical variety, learned in the war. Her oddnesses, though, are no impediment to marriage with the dashing adventurer Gabriel Legge, who takes her first to England, then to India, where Gabriel joins the East India Company before going independent as a pirate--a calling that will bring him fame and wealth, but also, at last, death. And Hannah? Her story is never simple, nor are her dealings either with English colonial society or with native Indian society, and in time she will become nothing less than loving mistress--or ``bibi''--of the Raja Jadav Singh, will survive a religious war, save her lover's life (through surgery), slay a victorious Muslim general, plead for peace before the Emperor Aurengzeb himself, then barely survive a second war--and possess an invaluable gem--before at last going home to Salem, where her life, along with that of her daughter (named, interestingly, Pearl), will continue quietly for some time. The narrator is a present-day American woman, an ``asset hunter'' whose assiduous research into the past is motivated as much by a desire for understanding as for money; her voice allows Mukherjee's enormous learnedness here to be worn lightly, and pulls her story along like a merchantman under full sail. -- Copyright ©1993, Kirkus Associates, LP. All rights reserved.

The Holder of the World Mukherjee, Bharati

The holder of the world

Book Description Condition: New. First Edition 1993. Only some shelf wear, otherwise New. Quality Books. Because We Care - Shipped from Canada. Usually ships within 1-2 business days. If you buy this book from us, we will donate a book to a local school. We donate 10,000+ books to local schools every year. Seller Inventory # R10830x