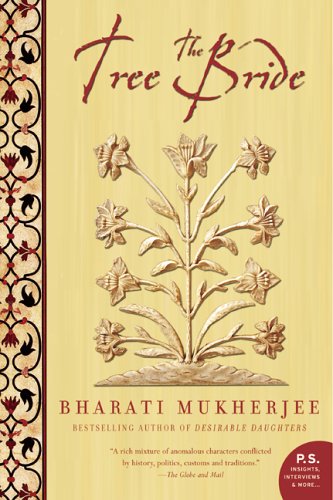 Tara Chatterjee, the heroine of Desirable Daughters, isback and ready to embark on the most universal of journeys: a search for herroots. The Calcutta-born but very much American Tara must trace the story of hergreat-great-aunt, Tara Lata. Her search takes her deep into her family history―andinto the history of her ancestral village―unearthing discoveries that aresurprising, shocking and ultimately cathartic.

Bharati Mukherjee, long recognized for her elegant, evocativeprose and her sophisticated characters― influenced by ancient customs yetanchored in modern times―has conjured another lively story that will leavereaders longing for the world they have left.

BHARATI MUKHERJEE is the author of seven novels, two collections of short stories, and numerous essays on immigration and American culture and the co-author, with Clark Blaise, of two books of non-fiction. She is the first naturalized U.S. citizen to have won the National Book Critics’ Circle Award for Best Fiction. She has been a professor of English at the University of California, Berkeley, since 1989. Follow Bharati on Twitter @missnewindia and become a fan on Facebook.

India, past and present, its inhabitants and expatriates, has always formed the framework of Mukherjee's literary world. In this vibrant novel, a sequel to Desirable Daughters and her best work to date, the author has fused history, mysticism, treachery and enduring love in a suspenseful story about the lingering effects of past secrets. Tara Chatterjee, the protagonist of the earlier novel, again narrates. The tale begins as her San Francisco house is firebombed by a man obsessed with killing her, and trails back to her legendary great-great-aunt and namesake, Tara Lata, who was born in 1874 and, at five, married to a tree because her fiancé died. Later, Tara Lata bravely conspired to win Bengal's independence from England. As the narrator gradually discovers why her namesake died in prison, she uncovers much evidence of the British rulers' contempt for the Indians they claimed they were "civilizing"; their cruelty, bigotry and duplicity cut into the narrative like a bloody knife. The plot itself is convoluted in a suspenseful way: the drama begun by Tara Lata's wedding resonates in miraculous interactions over the generations. As Tara Chatterjee's husband, a technological genius, has always told her, there are no coincidences in the universe. Over the course of this story, a dreadful 18th-century sea voyage spawns one man's redemption and another's hatred; honor and courage are met by betrayal; and loyalty to one's family and tradition prove to be the fuel of 20th-century love. The narrative brims with more action and vitality than Mukherjee's previous novels while retaining her elegant and incisive style. It's a good bet that this book will attract wide interest and leave readers eagerly awaiting the third volume in the trilogy.
Copyright © Reed Business Information, a division of Reed Elsevier Inc. All rights reserved.

Book Description Condition: Good. Ships from the UK. Former library book; may include library markings. Used book that is in clean, average condition without any missing pages. Seller Inventory # 18416053-20

Shipping: US$ 8.49
From United Kingdom to U.S.A.
Destination, rates & speeds